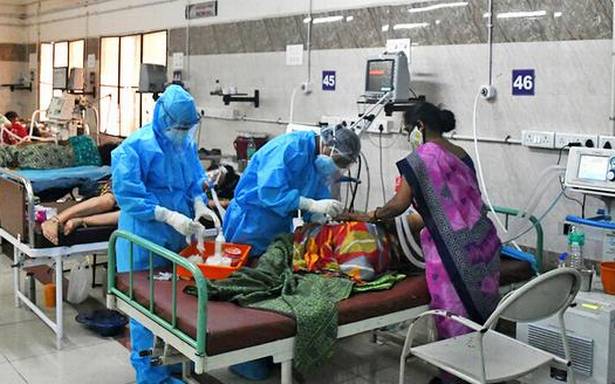 As a preparedness measure to counter a third wave of COVID-19, Tamil Nadu is ramping up infrastructure in paediatric wards and sensitising paediatricians to COVID-19 treatment protocols and management.

While whether the third wave of infections will largely affect children is still being debated, health officials and experts in the State are of the view that Tamil Nadu needs to be prepared, keeping in mind the experiences from the last two waves.

“All medical colleges and district headquarters hospitals are creating additional bed capacity over and above the existing paediatric capacity along with intensive care units,” Health Secretary J. Radhakrishnan said.

During a presentation to the Chief Minister, health officials had said that for paediatric preparedness during the third wave, regular screening and steps to vaccinate those under 18 were of utmost importance. High-risk children could be prioritised and given inactivated vaccines such as Covaxin, though this depended on the outcome of clinical trials and approval for the paediatric population.

Sensitising paediatricians in all districts, ensuring adequate supply of steroids, intravenous immunoglobulin and other drugs needed for paediatric care, and increasing infrastructure and human resources in paediatric and NICU units as per district-wise projects were the other measures suggested.

With experiences from the two waves, it was important to be prepared, pointed out J. Kumutha, expert adviser-child health, National Health Mission-Tamil Nadu. “We really do not know how severe the infection could be among the paediatric population, but we should not be caught unawares. We should be prepared, and this is exactly why the government is gearing up all paediatric units to see how many beds can be spared,” she explained.

She added that children were now the most vulnerable population as they were not vaccinated. “People already affected will have antibodies, and those vaccinated will have a certain degree of immunity. Having said that, babies who tested positive for COVID-19 during this wave did not have very severe disease, except for those with multisystem inflammatory syndrome in children (MIS-C). We are seeing slightly more cases of MIS-C this time than during the first wave,” she said.

Taking care of paediatric patients was also critical, as an attendant too should be allowed, she said. Hence, it was important for parents to get vaccinated, she stressed.

In the second wave, children accounted for less than 4% of the cases — around 54,800 children were affected, S. Srinivasan, State nodal officer-child health, stated. “As long as schools do not reopen and we achieve good vaccination coverage, these will act as indirect ways of protecting children from the infection. On the preparedness side, we do not want to take risks, and we should not struggle if there is a third wave,” he said.

Stating a few observations from treating children with COVID-19, he said during both the waves, well-nourished children did not experience problems. Children have innate immune responses, and the rejuvenating capacity of the alveolar epithelium too is better among children than adults. “We have many points in favour of children. In case of MIS-C, it is 100% treatable if diagnosed early. We had less than 1% of children with MIS-C in the second wave,” he said.