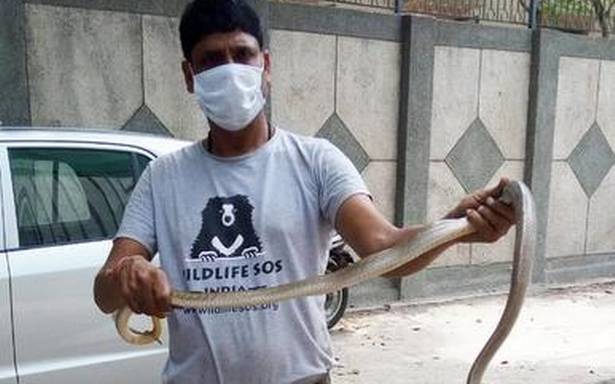 It was released into natural habitat

A six-feet long rat snake was rescued from a house in Inderpuri where it had got trapped inside an air conditioner. Wildlife SOS Rapid Response Unit rescued the snake and released it into its natural habitat.

The two-member rescue team said the snake had crawled into the bedroom and gradually scaled into the window air conditioner unit seeking reprieve from the soaring temperature outside.

Giving details of the rescue, the NGO that got a call on its helpline number said its team rushed to the location with rescue equipment and protective gear and instructed the family to lock the room so that the snake remained inside till they arrived.

“The team had to remove the air conditioner from the window and open the compressor to locate the snake. After a one-hour-long rescue operation, the rat snake was safely extricated out of the air conditioner and transferred to a snake bag,” Wildlife SOS said.

Kartick Satyanarayan, CEO of Wildlife SOS, said over the years, his team has rescued snakes that have been trapped in air conditioners, washing machines and even car engines. “Snakes are ectotherms which means they need to use outside sources to regulate their body temperature. Therefore, in summer season, they seek shade and cooler places to rest,” Mr. Satyanarayan said.

The Wildlife SOS Rapid Response Unit also rescued a common sand boa from a house in Chhattarpur and a wolf snake from the living room of a house in Ghaziabad recently. The NGO said it was reassuring to see that people approaching experts instead of taking the matter into their own hands when dealing with wildlife, especially snakes.