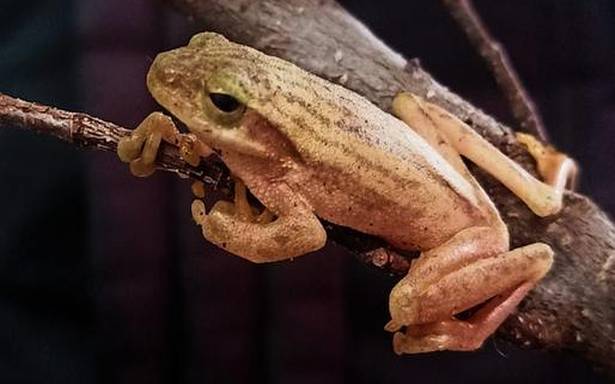 The natural history and distribution of Doria’s foam-nesting treefrog, last recorded in India in 1912, is virtually unknown

A virtually unknown treefrog with known traits such as changing skin shade and whipping up foam to protect its eggs has resurfaced in India after 108 years.

A team of zoologists from Mizoram University’s Developmental Biology and Herpetological Laboratory spotted Doria’s foam-nesting treefrog during a nocturnal survey in the buffer area of Mizoram’s Pualreng Wildlife Sanctuary in June 2020.

The only previous record of this treefrog in India was south of Arunachal Pradesh’s Tenga Valley in 1912. This frog belongs to the genus Chirixalus, of which there are currently 14 recognised species. These are distinguished from the Rhacophoridae family of frogs by the presence of opposable fingers.

The “rediscovery” of Doria’s foam-nesting treefrog in the country after a century was published in the April issue of Reptiles & Amphibians, the journal of the U.S.-based International Reptile Conservation Foundation.

“Very little is known about the natural history and the distribution of this treefrog. The species apparently is rare in India and no specimen had been collected since 1912 until our survey,” Mr Lalrensanga told The Hindu.

“Treefrogs can usually change their colour from lighter to darker or tan. This frog derives its name from the secretion of foam for covering the eggs the female lays. The foam guards the eggs against predators, direct sunlight and desiccation,” he said.

Doria’s foam-nesting treefrog (Chirixalus doriae) was first described in 1893 from Karin Bia-po in Myanmar and was later sighted in Thailand, Laos, Cambodia, Vietnam and Bangladesh.

The Mizoram University team collected a female specimen from a twig above the ground along the edge of a fish pond surrounded by flowering banana plants.

“Considering the intraspecies genetic divergence, we presume that the specimen from northeastern India likely represents a distinct population of the taxon. However, we suggest that further sampling for more specimens and genetic data are necessary to illuminate the population status of the species in the region,” the team’s study said.

Herpetologists based in Guwahati said more research on this “rarest of rare” treefrog could throw light on the quality of habitat or ecological changes in the region.