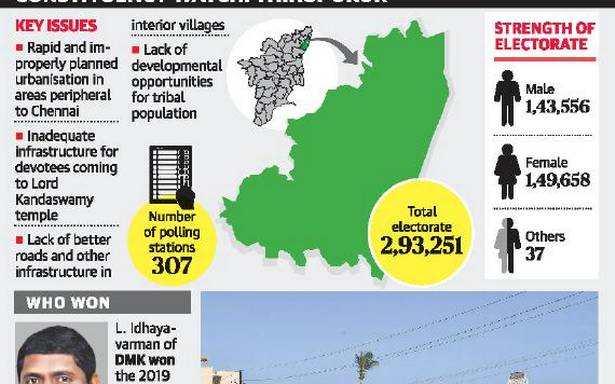 Kelambakkam, Navalur and Siruseri remain village panchayats, but they have grown fast with mushrooming of apartments

The Thiruporur Assembly constituency, which is now part of Chengalpattu district that was carved out of Kancheepuram in 2019, has a variety of landscape and different levels of urbanisation.

It has a coastal region, agricultural land, forests, industrial parks, fully urbanised areas, rural pockets and tribal hamlets. Consequently, the constituency faces a wide range of issues, with the key problem being the improperly planned urbanisation of areas on the periphery of Chennai.

Since 1984, the constituency has always elected MLAs from parties that came to power or their allies. The only exception was the 2019 byelection caused by the disqualification of M. Kothandapani, one of the 18 rebel AIADMK MLAs. In the byelection, L. Idhayavarman of the DMK defeated Tirukazhukundram S. Arumugam of the AIADMK by 21,013 votes.

However, the election of MLAs from the ruling parties has not helped in addressing several long-pending issues or in ensuring uniform development in Thiruporur, a section of the constituency’s residents say.

G. Selvam, an activist, says places like Kelambakkam, Navalur and Siruseri that technically remain as village panchayats have witnessed rapid urbanisation in the past decade with the mushrooming of high-rise apartments, primarily fuelled by the growth of information technology companies along the Old Mahabalipuram Road.

“These areas are now much bigger than the Thiruporur town panchayat. The rapid growth has led to sky-rocketing of real estate prices, improper handling of sewage by many apartment complexes, depletion of groundwater and increasing cost of living for the long-time residents,” he says.

Though these areas are well-connected by buses to Chennai city, many daily wage earners say affordability is an issue.

N. Lakshmanan, a construction worker who often travels to Chennai for work, says Metropolitan Transport Corporation (MTC) buses are operated now in place of mofussil buses operated earlier by the Tamil Nadu State Transport Corporation. “MTC buses that classify their services as deluxe charge us more. With the increase in fuel costs, it is not affordable to use two-wheelers also,” he says.

While certain pockets have seen rapid urbanisation, the Thiruporur town panchayat, which is also the taluk headquarters, is yet to get proper civic infrastructure. The residents say the underground drainage project has not been completed yet and several localities are in need of road repairs.

Lord Kandaswamy temple in the town attracts thousands of devotees. “Parking and other infrastructure is not capable of handling the crowd. We see huge traffic jams on auspicious days when there is more crowd,” says S. Mohan, who runs a shop near the temple.

A roughly 3 km road connects Thiruporur with Nemmeli, where a government higher secondary school and a constituent college of the University of Madras are located. Though many students commute from the town to Nemmeli, buses do not ply on this road. “It is not safe for students, particularly girls, to walk. They take a bus to Kelambakkam or Mamallapuram and then to Nemmeli. Buses should be run at least during school and college timings,” Mr. Selvam said.

The constituency, which has a considerable population of the Scheduled Castes, was a reserved constituency from 1977 to 2006.

It also has a sizeable tribal population, mainly of the Irula community. Housing, patta, road and other basic amenities have been a long-pending issue.

R. Malliga, a 38-year-old differently abled woman of a tribal community in Kottamedu village, says she has been trying for allocation of land for several years in vain.