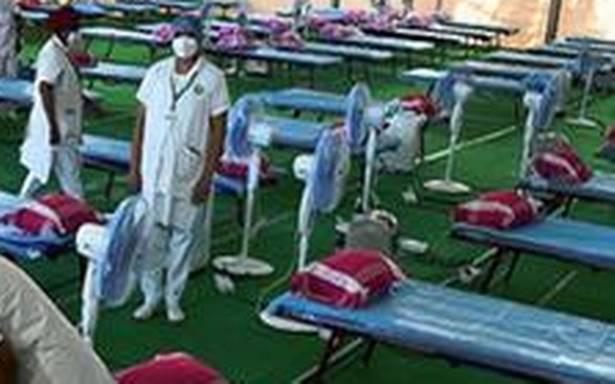 Ranipet district administration on Wednesday reported the first case of the Omicron variant of the SARS-CoV-2 virus after the whole genome sequencing of the sample of a 14-year-old boy from Arakkonam.

Health officials said the boy had travelled to Chennai where he underwent medical check-up at the Rajiv Gandhi Government General Hospital last week. He tested positive for the virus thereafter. Subsequently, his sample was analysed at the State Public Health Laboratory’s genome sequencing facility in Chennai when the S-gene dropout was detected. It was sent to the National Institute of Virology, Pune, which made the confirmation. He is being treated at the Chennai GH, with six members of his family whose sample results are awaited.

"We have also collected 45 more samples from the district for testing on Omicron. We will get the results in a day or two," T. Manivannan, Deputy Director (DD) Health Services, Ranipet, told The Hindu. Among the 45 samples, 15 samples were of the staff at the INS Rajali, the Indian Naval air station, 16 were of the staff of Regional Training Centre (CISF), and eight belonged to policemen from the special crime team. All these samples are from Arakkonam, Ranipet. Six samples were collected from residents in key towns such as Walajah, Arcot and Nemili, officials said.

Police said each of the two sub-divisions such as Ranipet and Arakkonam has a separate special crime team to investigate cases and trace suspects in other districts and States. "They (the crime unit) were on special duty, travelling to other States. Those who were with the team were isolated. At present, more than 80% of the police in the district were fully vaccinated," said Ranipet SP Deepa Satyan.

Meanwhile, Vellore, Tiruvannamalai and Tirupattur are on high alert with increased testing and additional beds being made available. On an average, 2,000 samples are being collected in these districts with over 75 vaccination camps being held. Unlike Tiruvannamalai, Ranipet and Tirupattur, COVID-19 cases are increasing faster in Vellore, with around 200 fresh infections on Wednesday from 105 on the previous day.

With a steep rise in the daily cases, Vellore Collector P. Kumaravel Pandian said the Jallikattu event would be banned depending on the cases.