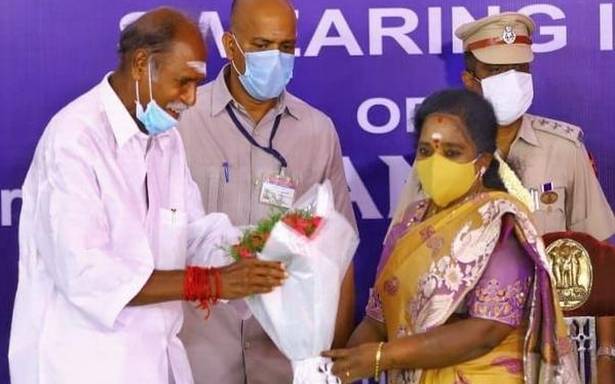 ‘BJP nominee will be Deputy CM’

All India NR Congress founder N. Rangasamy was on Friday sworn in as the Chief Minister of Puducherry for the fourth time. He will head a coalition government, comprising the BJP, and the party nominee would be given the Deputy Chief Minister’s post, according to Union Minister of State for Home Affairs G. Kishan Reddy.

Lt. Governor Tamilisai Soundararajan administered the oath of office and secrecy to Mr. Rangasamy at a function held on the lawns of the Raj Nivas.

Immediately after the swearing-in, Mr. Rangasamy reached the Legislative Assembly and assumed charge as Chief Minister. He signed the official registrar and left the Assembly.

The swearing-in ceremony was attended by a limited number of people, including Mr. Kishan Reddy, newly elected legislators belonging to the AINRC, the BJP, the DMK, the Congress, Independents and leaders of the AIADMK.

The AINRC, which contested as part of the National Democratic Alliance along with the BJP and AIADMK, secured 10 seats. The BJP won 6 seats while the AIADMK drew a blank in the 30-member Assembly.

Mr. Reddy, along with BJP legislators, called on the Lt. Governor after the swearing-in ceremony. Shortly after the meeting, the Union Minister told the media that the AINRC and the BJP had come to an understanding on the ministerial berths.

“The Chief Minister assumed office on Friday because it is an auspicious day. The Cabinet will be expanded in two days. Everything will go in a smooth manner,” Mr. Reddy said.