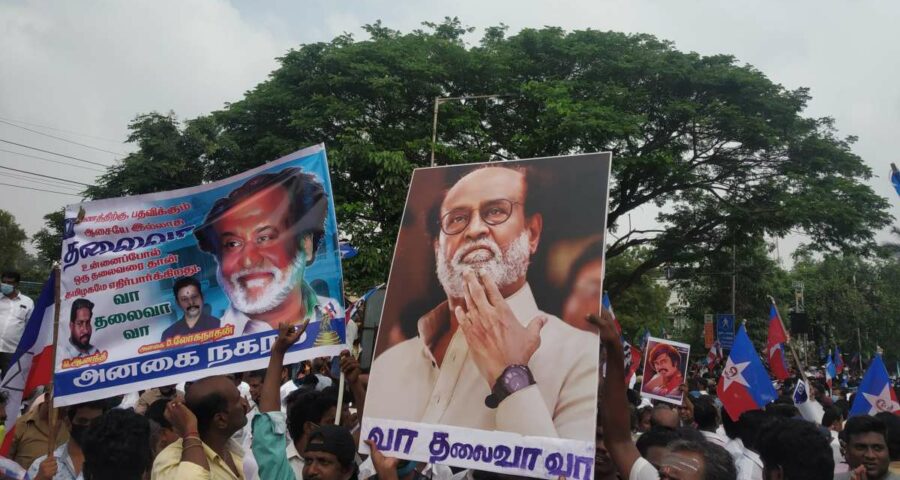 ‘Va Thalaiva Va’ (Come leader), ‘Ipo Ilana epovum illa’ (If not now, never) were some of the slogans raised by the fans who came together at the demonstration site. The demonstration which started around 10 am on Sunday was wrapped around 12:30 pm. Actor Rajinikanth’s fans gathered in large numbers at the Valluvar Kottam in Chennai urging the actor to change his decision of not taking part in electoral politics. Though the Chennai City Police granted permission for a gathering of only 200 people, that too only for an hour, more than 2,000 fans were spotted at the venue.

‘Va Thalaiva Va’ (Come leader), ‘Ipo Ilana epovum illa’ (If not now, never) were some of the slogans raised by the fans, who staged the demonstration from around 10 am till 12:30 pm.

The ‘Aravazhi porattam’ (peaceful protest) took place despite the Rajini Makkal Mandram’s repeated warnings. The mandram high command asked people not to take part in such protests which will further hurt their leader’s feelings and said strict action will be initiated against the functionaries if they indulge in such acts.

However, under the leadership of N Ramadhas, a senior leader of the Rajini Makkal Mandram scores of fans started to gather in the early morning on Sunday carrying huge banners and placards inviting actor Rajinikanth to join the political race. While some of the fans arrived in two-wheelers and cars, special busses were arranged to facilitate the fans from several districts of Tamil Nadu to arrive at the venue. Songs and dialogues from Rajinikanth’s movies were played on loop to keep the fans on their feet.

Speaking to indianexpress.com, Ramadhas said the demonstration was a huge success and he hopes that their leader will definitely pay heed to their request. “The city was on its feet today. Our mission was to organise such a gathering and show our leader that we are behind him and he has nothing to fear. We care a lot about his health more than anyone else. He can stay home and do the campaign virtually. We will climb each and every doorstep and seek the vote for our Thalaivar. Let him take rest at his residence, one single tweet or a video of Thalaivar will have a global attraction. People want our Thalaivar to enter politics. Through some of our sources, we came to know that Thalaivar was happy about the protest. We hope we will receive good news by Pongal, we hope he will change his decision for the welfare of Tamil Nadu. Our vote is only for our Thalaivar and not for anyone else,” he added.

A section of people who belong to RMM’s women’s wing said only Rajinikanth can provide the government which will make women safer. “The state is in a condition where even a two-year-old toddler cannot walk freely on the streets. There is no protection for women, only a person like Rajinikanth who believes in spiritual politics can provide that. We are here for you Thalaiva, save us from the evil forces,” a fan who had arrived from Tiruppur added.

The fans added that the demonstration at the Valluvar Kottam in Chennai is just the tip of the iceberg and they will continue to stage such gatherings across the state till their leader changes his decision.

“We believe our Thalaivar will see this, listen to our demand. We need him now more than at any time. As he said, political and government change will never happen if our leader doesn’t take the political plunge. The future of Tamil Nadu is in the hands of our Thalaivar, he is the only one who can save our state,” said Kabali Hari, who has arrived from Coimbatore.

Actor Rajinikanth on December 29 announced that he will neither launch a party nor take part in the electoral politics owing to his ill health and the pandemic situation. The announcement came weeks after he promised that his party will contest in the upcoming assembly election in Tamil Nadu and will announce the details about this political plan soon.

In a three-page statement he posted on Twitter, Rajinikanth expressed regret and said it pained him to make such an announcement after having said he would contest in the elections and happy to give even his life for the people of Tamil Nadu. “It is with profound regret that I have to say that I will neither be launching my political party nor entering politics. Nobody can understand my pain in making this decision,” he wrote.