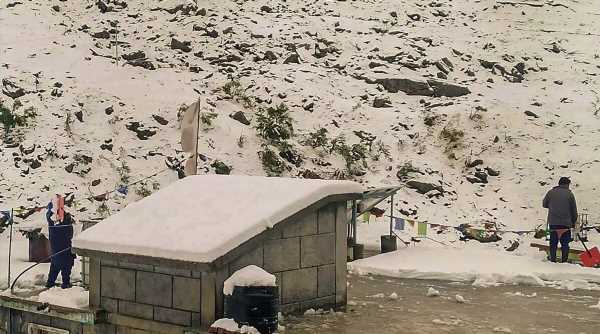 In the next 24 hours, rainfall is expected to continue in parts of J&K and Ladakh, followed by a significant improvement in weather conditions from Sunday afternoon. As heavy rains lashed the plains of Jammu and Kashmir, fresh snow showered parts of the Union Territory and Ladakh on Saturday, bring with it the early onset of winter-like conditions.

Due to the heavy rainfall since Friday night, along with the current spell of snow, traffic was suspended on the Jammu-Srinagar national highway, the only road linking Kashmir with the rest of the country.

A massive landslide triggered by rains at Cafeteria Morh near Ramban town resulted in the suspension of traffic, Senior Superintendent of Police (national highway) Shabir Malik told news agency PTI. “The incessant rains are hampering the restoration work on the highway. It will take at least five hours to clear the landslide in Cafeteria Morh area after the rain stops,” Malik said.

In the next 24 hours, rainfall is expected to continue in parts of J&K and Ladakh, followed by a significant improvement in weather conditions from Sunday afternoon. Moderate snowfall was witnessed in Gulmarg, Sonamarg, Pahalgam, Shopian and Gurez areas of the Valley, while Ladakh has been experiencing snow since Friday night.

Besides the highway, traffic at Mughal Raoad, a link connecting the twin districts of Poonch and Rajouri in the Jammu region with south Kashmir’s Shopian district, was also suspended due to moderate snowfall. The highest rainfall was recorded in Banihal in Ramban district, which recorded 47.8 mm, followed by 33.8 mm in Katra, the base camp for pilgrims visiting the Mata Vaishno Devi Shrine in Reasi district. Jammu recorded 12.8 mm of rainfall, and a minimum temperature of 15.1 degrees Celsius, 1.6 degrees below normal for this part of the season.

Timely trimming of tree branches by the UT’s Power Development department has resulted in minimal disruption of electricity supply.