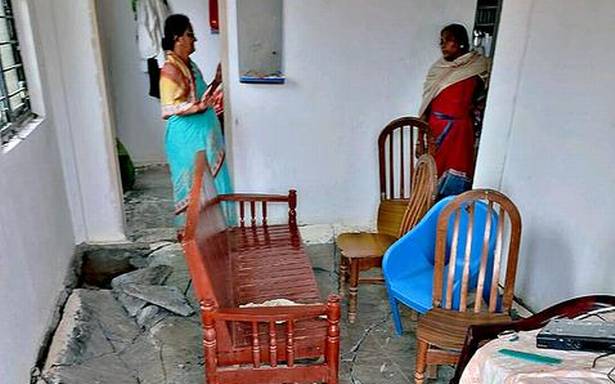 Lack of quality to the fore, every house has a tale to tell

Usually, rains bring cheers to farmers. Here the case is different because rains are not bringing smile on their face and instead fear is going down their spine.

The government accommodated the oustees of Mallannasagar here at this village and houses were constructed for them by the government. Many of them are farmers, except a few.

It was house number 46 in Rehabilitation and Resettlement (R&R) Colony of Etigaddakishtapur at Mutrajapally. On Tuesday, Nayini Aruna and her two children — Raju and Santosh – had a bitter experience. While Aruna was rolling beedis both the children were nearby. All of a sudden the basement of the hall sank, creating fear among them. Panicky over the incident, they rushed out of the house screaming for help. It took some time for them to become normal.

“At the time of incident, I am outside on work. By the time I reached home all my family members are in fear. They feared that the house is collapsing but after some time everyone became normal. We were forced to vacate our native village and are now living in fear. We do not know what was in store by the time of completion of rainy season,” Nayini Muthyam told The Hindu.

At another house, rainwater seeped in such a way that the inmates had to place some vessels like plastic tubs to arrest the rain drops spreading over.

But their effort was in vain as slowly the entire house witnessed rainwater seeping from the top. This was in house number 1275.

In the beginning of the season, walls of two houses collapsed and officials clarified that there was no compromise in regard to quality and that the wall collapse was due to construction of toilets under the steps that had weakened the foundation of the wall. At some houses, the front yard of the house sank.

“Every house has a tale to tell. The problems of all houses are not common. Cracks developed in some houses. There is seepage in some other places,” said Raju, another oustee of Pallepahad.