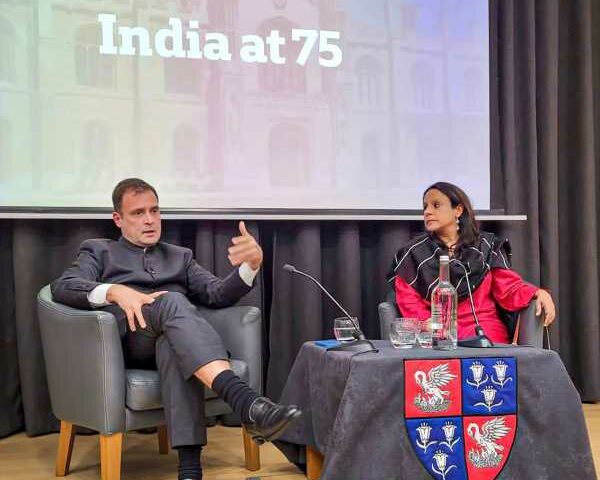 Congress leader Rahul Gandhi’s recent visit to the United Kingdom, and especially his meeting with British Labour Party leader and MP Jeremy Corbyn in London came under the scanner after his controversial statements.

Sources in the government have revealed that the Congress MP skipped the due procedure, and had not sought political clearance for his visit.

Sources said that another Member of Parliament, Professor Manoj Jha from the Rashtriya Janata Dal, who also went for a function in which Rahul Gandhi was participating in London, had all due permission including — the due political clearance.

Jha also spoke at the Cambridge University, a day ahead of Rahul Gandhi.

On Tuesday, Gandhi posed a picture with UK Labour party leader and known India-baiter Jeremy Corbyn, which sparked off a war of words between the Congress and the Bharatiya Janata Party.

While the Wayanad MP spoke at the ‘Ideas for India’ conclave, Gandhi said that democracy is in danger and the Constitution of India is under attack.

Hitting out at Congress leader Rahul Gandhi over his remarks concerning “complete change” in the Indian Foreign Service, Jaishankar said that the change is not called “arrogance” but “confidence and defending national interest”.

The remarks came after Rahul Gandhi said at an event in London that he had been told by bureaucrats in Europe that IFS has changed and the officers are “arrogant”.

Jaishankar said in a tweet that the IFS officers follow the orders of the government and protect national interests while countering the arguments of others.

“Yes, the Indian Foreign Service has changed. Yes, they follow the orders of the Government. Yes, they counter the arguments of others. No, it’s not called Arrogance. It is called Confidence. And it is called defending National Interest,” Jaishankar said.

He also attached a clip of Rahul Gandhi’s remarks. In his remarks at the ‘Ideas for India’ conference in London, Gandhi said he had been told that IFS officers do not listen to anything, they were just getting orders from the government and there is no conversation.