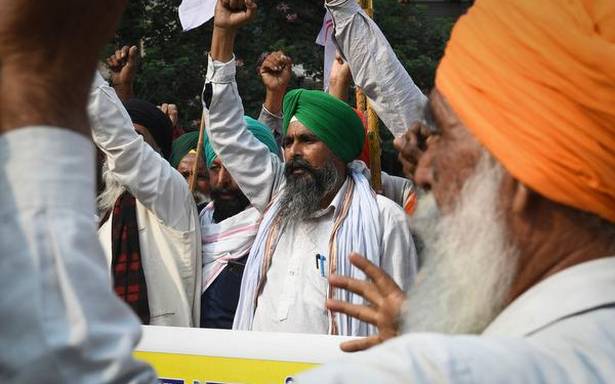 The cases on stubble burning would be sympathetically considered, says CM Channi

Punjab Chief Minister Charanjit Singh Channi on Wednesday said all the FIRs registered by the Punjab police against the farmers, who had been protesting against the Centre’s farm laws within the State, would be cancelled.

The Chief Minister asked the police to cancel the FIRs after following the prescribed procedure with due diligence. The announcement was made after meeting the representatives of the 32 farm unions of the Samyukt Kisan Morcha (SKM) in Chandigarh

At a press conference, Mr. Channi said all the cases on stubble burning registered against the farmers would be sympathetically considered to safeguard the interest of the farming community. However, he appealed to farmers to refrain from stubble burning as it was hazardous, both for the environment and the human health.

Mr. Channi said the State Government is seriously contemplating bringing a comprehensive proposal in the next Cabinet for the formulation of a policy to reserve around 75% of posts in the Government exclusively for Punjabi youth.

Referring to the demand raised by the representatives of the SKM to waive the outstanding loans of all categories of farmers including small, marginal and landless farmers, Mr. Channi said he would have a separate meeting with them after detailed discussions with the Finance Department regarding the State’s financial position.

He said 5.63 lakh farmers have already benefited from the loan waiver scheme to the tune of ₹4,610.84 crore while ₹520 crore is being provided to landless farmers and farm workers.

On the shortage of diammonium phosphate (DAP) during the ongoing rabi season, Mr. Channi said the problem has arisen due to a hike in the prices in the international market. “The State Government with its persistent efforts and coordination with the Union Government has considerably eased out the situation.”