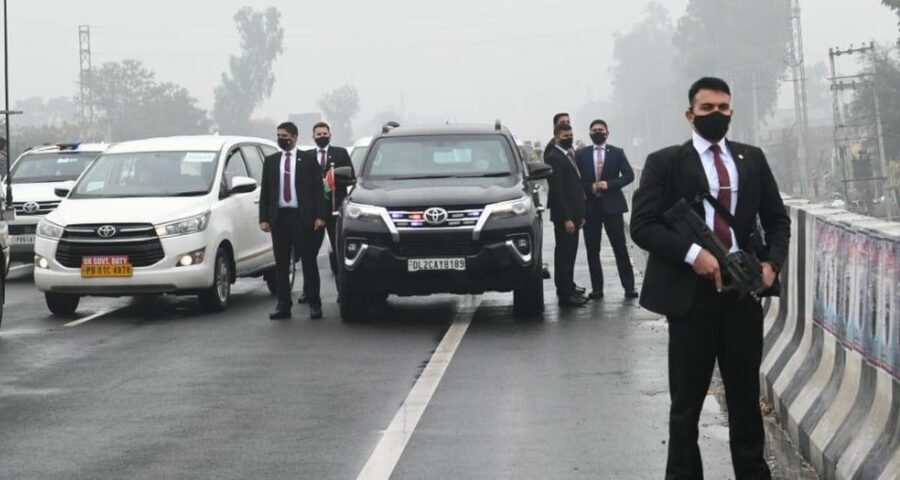 ‘The PM of India was 20 km away from the Pakistan border and he is one of the persons under extreme threat from that country and they put his life in danger.’

In a first incident of its kind, Prime Minister Narendra Damodardas Modi’s convoy was stranded on a flyover for about 15 to 20 miniutes in Ferozepur on Wednesday following a blockade by protesters, forcing him to cut short his visit to poll-bound Punjab and return to New Delhi.

The incident has led to an acerbic exchange of words between the Government of India and Charanjit Singh Channi’s government in Punjab, with the Union home ministry crying foul over the breach in safety protocol and seeking a report from the state government.

Even as the issue takes on political colours, the fact remains that the prime minister of India faced a security breach in a crucial border state — a fact the Channi government cannot obscure.

Dr Singh, who has handled visits of different prime ministers to Uttar Pradesh in his career, is in no doubt that the Punjab police failed in its duty.

“If the Punjab police had deployed 10,000 men, what were they doing? Were they having tea with the agitators?” Dr Singh asks Syed Firdaus Ashraf/Rediff.com.

How do you see the breach in Prime Minister Modi’s security protocol in Punjab on Wednesday?

If there is a trophy for the shoddiest VIP visit I have seen in my 36 years of career and in my life, this trophy will go to yesterday’s incident. This was nothing short of unmitigated disaster where everything went wrong.

Who is to be blamed for this fiasco? The Punjab police? The Special Protection Group, which protects the prime minister? Was it a lack of co-ordination between the Punjab police and the SPG?

Totally, the Punjab police, and there have to be multiple failures.

It is not a matter of choice as much as our political friends would like to apportion the responsibility to the BSF (Border Security Force) and the SPG.

It is not politics, but policing. There is a world of difference between policing and politics.

Policing does not run on conjecture and flights of fantasy.

The BSF has no role to play in such matters because (police) thanass and chowkis are there.

The SPG is governed according to the SPG Act of 1988 and the SPG Amendment Act of 2019, as much as political leaders would like to level allegations in the most obnoxious and undesirable manner.

Chief Minister Charanjit Channi said it was a sudden change of plan from the PM’s side that caused the problem. He was supposed to take a helicopter for the rally, but then due to bad weather he took the road. And therefore this untoward incident happened. Is that argument tenable?

All these things happen suddenly. There cannot be a prediction as to what route a VIP will take if there is an emergency or contingency or medical emergency or bad weather.

All changes are sudden and the SPG and a professional police force are never taken by surprise. They do not let grass to grow underneath their feet. They are prepared for any contingency and everything.

Do you think the Punjab police did not anticipate some 10,000 protestors coming all of a sudden on the road from where the PM’s convoy was going to pass through?

Of course, they anticipated it and I am not going to give (you) ideas, but whenever there is a mess-up and the top leadership is missing, I have my own reasons and questions.

If I am not mistaken, one of the arguments the Punjab government put forward was that one of the senior police officers tested positive and therefore they did not meet the PM as they were following Covid protocols.

Everybody had Covid? I am surprised that everybody had a Covid attack on the day of the PM’s arrival. Isko kehte hain husn-e-ittefaq (it is called strange coincidence).

The Centre is saying there is a ‘blue book’ for protocol which the Punjab police failed to follow.

I can only acknowledge that there is a blue book. It is in the personal custody of the district superintendent and police commissioner. The contents are totally secret. There is elaborate details on the procedures as per the SOP (standard operating procedure). I will stop at that.

The Punjab government says the PM could have taken another route but he refused to do so.

And here the hands and legs stopped listening to the brain; the body will move without check and coordination and that is what happened yesterday. There was absolutely no coordination.

There was absolute mess. This was the worst form of security arrangement.

Local thanas and local chowkis continue to be operational in these areas. These political parties must do their homework properly and then come out with pearls of wisdom.

It was the Constitutional duty (of the Punjab police) and they violated that.

The PM of India was 20 km away from the Pakistan border and he is one of the persons who is under extreme threat from that country and they put his life in danger which speaks volumes about their competence and capabilities and their commitment to the rule of law.