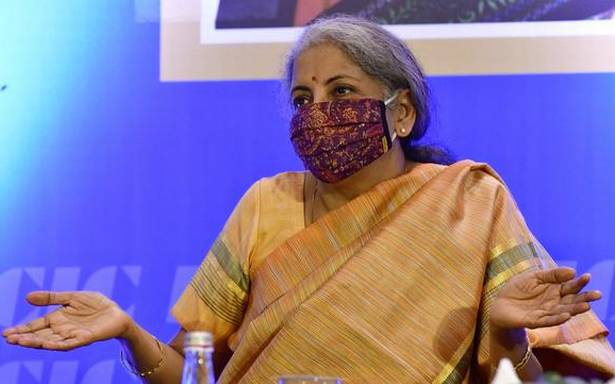 The GST Council meeting is scheduled on May 28

Ahead of the GST Council meeting, Congress leader and Punjab Finance Minister Manpreet Badal has written to Finance Minister Nirmala Sitharaman raising several concerns and seeking timely and comprehensive action on the GST.

In his five-page letter to the finance minister, he said even though the GST Council is meeting after eight months, the agenda for it is "mundane"’ and does not deal with substantive issues that have been raised in the past.

The Goods and Services Tax (GST) Council meeting is scheduled on May 28.

Mr. Badal also said that bureaucratic decisions are setting dangerous precedents of subverting the process of law and stressed that the GST Council is a sum total of the Central and State legislatures for the purpose of GST and cannot be short circuited in important decisions.

The Punjab finance minister also highlighted that life-saving items for COVID-19 have Basic Custom Duties of up to 20%and GST of up to 18% , and said they need to be tax free.

"In view of the prevailing position the country finds itself in today, we need to take some urgent measures on the pandemic front. It is baffling that despite the crisis our country currently finds itself in, with millions of people suffering consequences of COVID and inadequate health infrastructure, taxes this high continue to apply on basic essentials needed to overcome this life-threatening disease," Mr. Badal said. He also raised the issue of GST Implementation Committee bypassing and subverting state laws and said no meaningful prior consultation is held with states while the dispute resolution mechanism is totally missing in the GST.

Mr. Badal also raised the issue of extending validity of certain exemption notifications, enactment of new restrictions on availment of tax credits by amending Rule 36 and insertion of rule 86B (payment of minimum tax in cash even while tax credit is available in certain cases) and cancellation and suspension of registration on additional grounds by amendment of Rules 21 and 21A.

He also highlighted the issue of restrictions on validity of E-way Bill, amendment in various rules placing additional burden of compliance on tax-payers, extending compliance burden of e-invoicing on mid-sized entities with turnover between ₹100-500 crore and waiver of penalties in certain situations.

"Most of these decisions require an amendment to rules that would also require placing them before State legislatures. I fear that substantive benefits cannot be withdrawn or restrained by subordinate law and some of them may have ideally warranted a process of enactment of law," he told the finance minister.

"We are thus setting dangerous precedents of subverting the process of law making to officers, clearly a case of excessive delegation and running the risk with judiciary of being struck down. We should keep in mind that GST Council is sum total of the Central and State legislatures for the purpose of GST and thus cannot be short circuited in important decisions," he noted.

The Punjab finance minister, who is a member of the GST Council, said the GST is being increasingly perceived to be causing "excessive harassment and arbitrariness (eg freezing of productive assets of business, suspension of registrations, and denial of eligible tax credits) and moving away from a fair and non- adversarial tax system" that forms the foundation for a progressive tax.

"It would have been desirable to hold a discussion within GSTC about striking the right balance between the needs of facilitation and enforcement before going for these changes. To guard against such abuse we should define and notify formally powers of the GIC," he said.

Mr. Badal also noted he has always hoped that GST will provide the foundation for a strong and vibrant India.

He said while Punjab had even gone ahead with grave risks to its revenue agreeing to subsume Purchase Tax in GST, "our fears were not unfounded as have been proven with a somewhat dubious distinction of topping the States with highest shortfall. While we shall grapple with our deficit as best as we can, we don’t wish to see our sacrifices go waste for the nation. All hopes pinned on you."