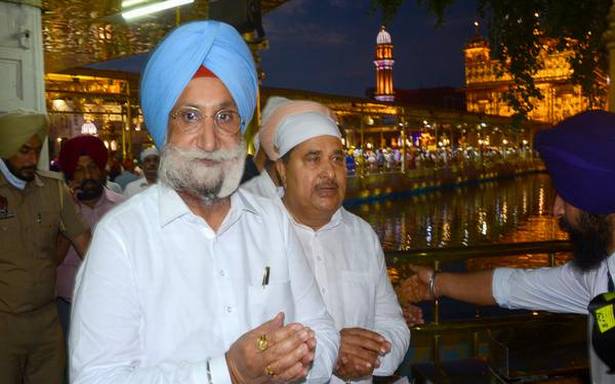 Punjab’s Deputy Chief Minister Sukhjinder Singh Randhawa on Friday ordered an investigation to trace Aroosa Alam, a Pakistani journalist and friend of former chief minister Amarinder Singh, and her links with the ISI.

Soon after Mr. Randhawa’s announcement, Capt.(retd.) Amarinder hit out, saying “So now you’re resorting to personal attacks @Sukhjinder_INC. One month after taking over this is all you have to show to the people. What happened to your tall promises on Bargari & drugs cases? Punjab is still waiting for your promised action.”

“You were a minister in my cabinet @Sukhjinder_INC. Never heard you complain about Aroosa Alam. And she’d been coming for 16 years with due GoI clearances. Or are you alleging that both NDA and @INCIndia led UPA govts in this period connived with Pak ISI?” he added.

The former chief minister said Punjab police has been put on a baseless probe at the cost of State’s safety. “What I’m worried about @Sukhjinder_INC is that instead of focusing on maintaining law & order at a time when terror threat is high and festivals are around the corner, you’ve put @DGPPunjabPolice on a baseless investigation at the cost of Punjab’s safety,” he said.

Mr. Randhawa retorted on Twitter, saying Capt. Amarinder should not worry about law and order situation as the current government has not outsourced the Punjab govt to ‘anyone’.

“By the way, sir @capt_amarinder why are you so perturbed over probe on Aroosa and ISI links? Who sponsored her visa and everything concerning her will be thoroughly probed. I do hope everyone concerned will co-operate with police in probe,” he said.

Mr. Randhawa was one among Congress leaders, who had revolted against Capt. Amarinder, expressing “lack of faith in the leadership of the former chief minister in fulfilling the party’s 2017 Assembly election promises.”

Counter reacting, Capt. Amarinder on Twitter, said “Perturbed? Have you ever seen me perturbed on any issue in all these years @Sukhjinder_INC ? In fact, you seem to be perturbed and confused, if your flip flops are any indication. Why don’t you make up your mind on this so-called probe against Aroosa Alam? As for who sponsored Aroosa’s visa, of course I did, for 16 years. And for your information, @Sukhjinder_INC , requests for such visas are sent by Indian HC to @MEAIndia , which gets them cleared by RAW & IB before approving. And that’s what happened in this case every time,” he said.