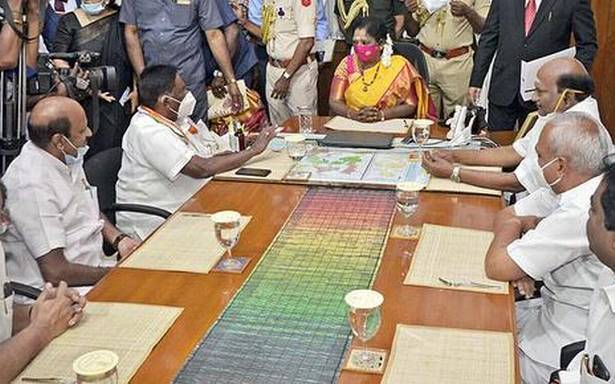 Voting will be by show of hands

The newly appointed Lieutenant-Governor of Puducherry, Tamilisai Soundararajan, on Thursday directed the Assembly Secretariat to convene the House on February 22.

A press release issued by the Raj Nivas said the single agenda of the session should be to determine whether or not the Chief Minister enjoys the confidence of the House. The voting will be done by a show of hands. The proceedings should be completed by 5 p.m. They would be videographed and should not be adjourned, delayed or suspended, the release said.

The Lt. Governor noted that consequent to the disqualification of one member and the resignation of four others, the House strength stood altered — the Congress and its allies were deadlocked with the Opposition, at 14 seats each.

The Congress has 10 seats and the DMK three. One Independent member supports the government.

In the Opposition, the AINRC has seven seats, the AIADMK four and the BJP three.

The Lt. Governor also directed the authorities to conduct the proceedings in a peaceful manner.

Earlier in the day, Leader of the Opposition N. Rangasamy said the Lt. Governor had given the Opposition parties an assurance on their demand for holding a floor test for the Congress to prove its majority as per the rules. Talking to reporters after calling on the Lt. Governor, he said Dr. Soundararajan agreed to look into the demand. “She has agreed to act in accordance with the provisions of the Constitution.”

In the morning, Dr. Soundararajan was sworn in as the Lieutenant Governor.