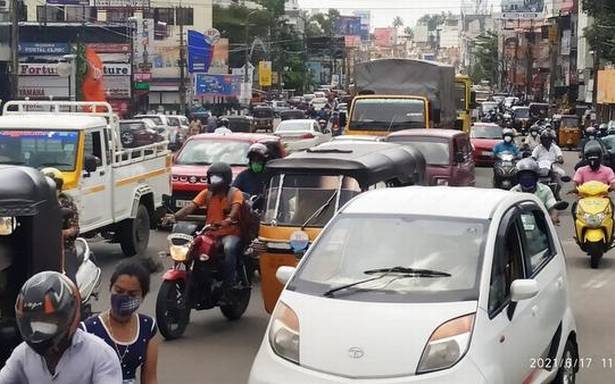 After 40 days of lockdown induced by the second wave of COVID-19, public transport was restored partially in Kerala on Thursday, with the Kerala State Road Transport Corporation, Railways, and the State Water Transport Department commencing nearly full-fledged operations.

With the graded ‘unlock’ for week days, announced by the government, commencing on Thursday, more citizens were seen on streets and on trains, buses, and ferries across the State. Private vehicles and autorickshaws also plied in large numbers in areas where restrictions had been lifted following a fall in the test positivity rate. Auto and taxi stands had ample number of vehicles. With the police avoiding vehicle-checks, motorists moved freely on roads, stopping only at traffic intersections where signals had started blinking again.

The KSRTC, which had announced that the services will be demand-based, operated 1,528 schedules on Thursday. Of these, 945 schedules were with Ordinary buses and 583 with Fast Passenger buses and above category. The KSRTC buses did not stop in local bodies classified as C and D categories (TPR of 20% and above). In the South zone based in Thiruvananthapuram, KSRTC ran 712 schedules on Thursday compared to 340 schedules (for restricted categories) on Wednesday.

The State Water Transport Department operated only 50% of schedules from stations. The boat services that began at 7 a.m. would wind up at 7 p.m.

Officials say it will take weeks before patronage of public transport is completely restored in the State.