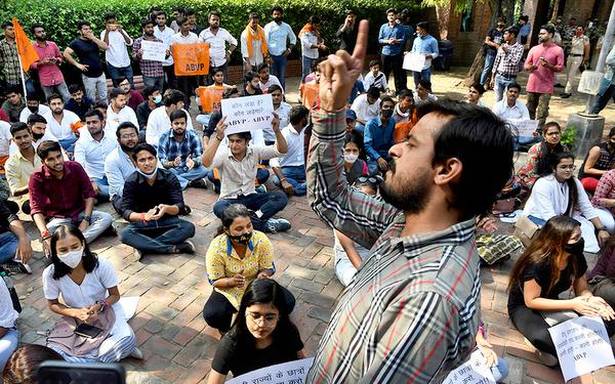 ABVP calls a halt to admission process; SFI, AISA, NSUI come out in support of Kerala board students

Several students’ organisations staged protests on the Delhi University campus, which is yet to fully open after the COVID-19 lockdown, against the admission policy being followed by the university. While some groups were in support of the policy, others alleged “unreasonable admissions”.

The Akhil Bharatiya Vidyarthi Parishad (ABVP), the student wing of the RSS, demanded that the university’s admission process be stopped immediately and the authorities act upon the “unreasonable hike in cut-offs to do inflated scores”. The group sought that the university devise a mechanism of “moderation and normalisation” of marks for all State boards of the country. The students suggested that the university conduct a preliminary screening of candidates for admission to its colleges so that students from all backgrounds can be admitted. “Due to the high cut-off, students of only some State boards, where marks have been inflated, are able to take admission in Delhi University,” the ABVP alleged.

The protests started after several candidates with perfect score from Kerala board sought admission to the university, filling seats at many colleges that released a cut-off score of 100%.

Countering the arguments of ABVP, the Students’ Federation of India (SFI) said according to details shared by the university, only 5% of the total admissions after the first cut-offs constituted students from the Kerala board. “The good performance of Kerala student is due to their hard work as well as the constant effort by the State government to provide access to education even during the pandemic,” said Utkarsh, vice-president, SFI-Delhi.

The students said that the protests against the Keral Board applicants cannot be seen in isolation as students coming from Bihar and Haryana to DU had been the target in the 1990s and 2000s and that the varsity must welcome students from across the country as it is a Central University.

The protesters condemned the statement by a professor from Kirori Mal College, Rakesh Pandey — a member of RSS-affiliated NDTF — who, they alleged, has been instigating regionalism against students from Kerala by terming good scores “marks jihad”. Mr. Pandey had used the term in a Facebook post while giving an example of “over admission” in a particular college due to applicants from Kerala board.

The All India Students’ Association and the National Students’ Union of India also protested outside the Kirori Mal College. While AISA demanded the suspension of Mr. Pandey, and said that he had made “Islamophobic and racist comments” against students hailing from Kerala. “Alleging a ‘marks jihad’ in Kerala State Board, the teacher has parroted the age-old RSS rhetoric against Muslim ‘merit’ and against the people of Kerala,” the AISA said. The NSUI said they had met the principal of Kirori Mal College and handed over a memorandum demanding strict action against the professor. NSUI’s national secretary Nitish Gaur said the students from Kerala board had worked hard to get 100% marks and were being dragged into a conspiracy being propagated by right-wing professors.

ABVP state secretary Sidharth Yadav said that “the future of the students is in danger due to the short-sightedness of the university. All the students of the country are deprived of justice because of inflated results of a few State boards. We are not against any one board or one State, we demand that students from all States and boards should get equal opportunity of admission. DU should have adopted some other option for admission in this adverse situation of pandemic.”

Meanwhile, the university said that out of 60,904 applications for admissions, 14,205 had been approved by the principals of various colleges and 27,006 students had paid the fees.