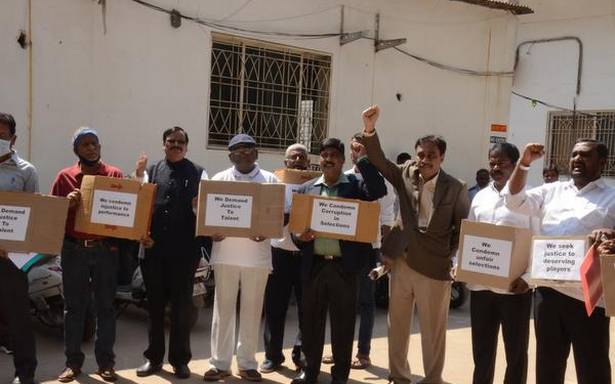 A group of Club Secretaries, affiliated to the Hyderabad Cricket Association, and parents of players led by former HCA chief G. Vinod protested at Gymkhana Ground here on Saturday against the alleged irregularities in the selection of the Hyderabad team for the Vijay Hazare Trophy one-day tournament.

“What has happened in the last two days with regard to the selection of the Hyderabad team was unprecedented. Cricket administration has hit a new low,” said Mr. Vinod while addressing the group and appealed to all the 220-odd affiliated Secretaries to raise their voice against “gross injustice being meted out to the performing players”.

“It is in gross violation of the Justice Lodha guidelines which suggest that a five-member selection panel has to pick the team. But, unfortunately, the day before a two-member committee out of which one has not even played the mandatory 35 first-class matches and worse has not retired from first-class cricket was involved in the process,” Mr. Vinod said in the presence of former HCA Secretary T. Seshnarayan among others.

“We will write to the BCCI to depute an Observer at least for selecting the under-19, under-16 and under-23 teams in the future. Or else, the cricketers will be demoralised as performances in the League are being ignored. The fact that none of the five top scorers in the A1-Division League figured in the Hyderabad squad is proof of them,” he explained.

“We also appeal to the HCA to convene the AGM immediately, appoint a Cricket Advisory Committee, name the selection panels as per the Justice Lodha guidelines,” Mr. Vinod concluded.