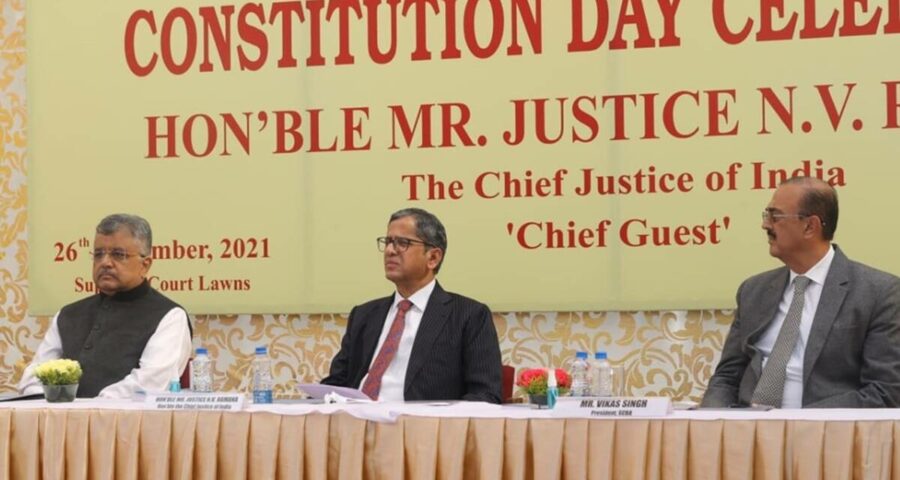 🔴 The Chief Justice of India said the most important feature of the Constitution is that it “provides a framework for debate” which allows the nation to progress. Chief Justice of India N V Ramana Friday called upon lawyers to protect the institution of judiciary from “motivated and targeted attacks”.

“…I want to tell all of you that you must assist judges and the institution. We are all ultimately part of one large family. Protect the institution from motivated and targeted attacks. Do not shy away from standing up for what is right, and against what is wrong,” he said while speaking at the Constitution Day celebrations organised by the Supreme Court Bar Association (SCBA).

CJI Ramana added that “the most direct and visible players in this process are, of course, the lawyers and judges of this country”.

He said that lawyers, being people with intimate knowledge of the Constitution and the laws, have the responsibility to educate the rest of the citizenry about the role that they play in society. “The history, present and the future of this nation lie on your shoulders. This is a heavy, if not the heaviest, burden to bear,” he said.

Adding that the legal profession is called a noble profession for a reason, he said, “It demands expertise, experience and commitment, like any other profession. But, in addition to the above, it also requires integrity, knowledge of social issues, social responsibility and civic virtue.” He also exhorted them to take up cases pro bono whenever possible.