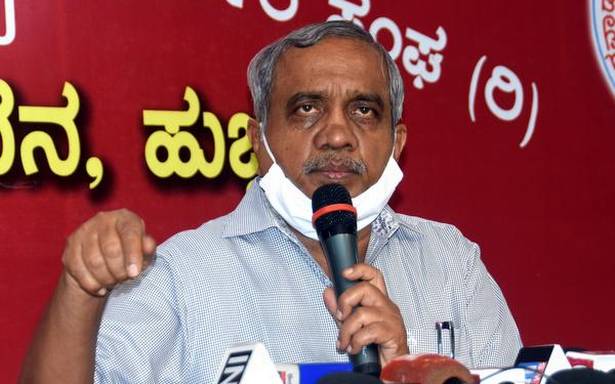 The former MP and industrialist Vijay Sankeshwar has criticised some of the Union and State government policies and methods of handling the pandemic.

First of all, the Union government should withdraw its announcement that it will provide foodgrains to BPL families for the next few months. This makes the beneficiaries lazy and they will not come to work, he said.

“When we ask workers to come to work, they refuse saying that Prime Minister Narendra Modi is giving them free foodgrains. The Union government should make them work and pay wages instead,’’ he told journalists in Hubballi on Sunday.

“Free ration to 80 crore Indians is a big mistake,” he said. According to him, only around 30 lakh-40 lakh people were living in utter poverty in the country and free ration should be given only to them,’ he said. Free foodgrains will stop workers from seeking work, he said.

Mr. Sankeshwar criticised the holding of elections in Karnataka and other States and the Kumbh Mela gathering in Haridwar, during the pandemic. He, however, said that despite all such challenges, the Prime Minister and all the Chief Ministers were doing a commendable work in managing the epidemic.

He expressed the confidence that the Prime Minister would rectify the oxygen scarcity soon.

He said that the scarcity was artificial and could be resolved through proper management. “Till now, Linde India, a private company that produces 50% of India’s liquid oxygen, was supplying only around 1% of its total production to the health care sector, while giving the rest 99% for industrial use,” he said.

However, with the Modi government banning the supply of liquid oxygen to industries, there will be enough oxygen supply to hospitals, he said.

He recommended home remedies in the fight against COVID-19. “Just two drops of lemon juice in the nose can increase oxygen saturation level in the body and prevent COVID-19 infection,’’ he said.

“Our immune system has improved. I have seen similar results in around 200 persons who have used the home remedy,” he said and added that, “Just last night, two of my senior officials suffered low oxygen levels. I suggested to them to use lemon and within half-an-hour, their oxygen levels rose from 88% to 96%.”

He said that 80% of India’s oxygen scarcity could be addressed by using this “lemon therapy”.