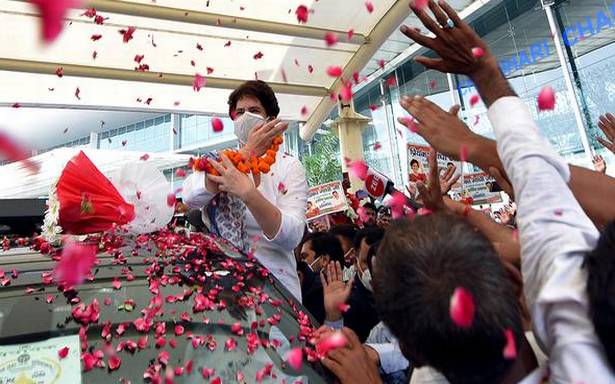 Addressing journalists at the U.P. Congress headquarters after arriving in the State capital for a scheduled three-day visit, Ms. Vadra pointed out that on Thursday, the PM had handed out a “certificate” to Mr. Adityanath for his good handling of the second wave and for establishing “vikasvad” in the State.

She further said, “The government is itself trying to destroy the Constitution and attack democracy. And behind them is the hand of Modi-ji who comes here and praises them [the State government] and congratulates them for the Panchayat polls when they actually spread violence during the polls and allowed lawlessness.”

On Sunday, addressing an event in Varanasi, Mr. Modi lavished praise on Mr. Adityanath for his work and handling of the second wave of COVID-19, terming it unprecedented and remarkable.

The Congress leader further said that the Bharatiya Janata Party (BJP) went ahead with the Panchayat polls as it thought the result would come in its favour. She accused the BJP government of “spreading violence” during elections for Zilla Panchayat Chairperson and Block Pramukh as the Panchayat poll results did not come in favour of the ruling party.

Ms. Vadra accused the administration and police in U.P. of kidnapping the candidates in these polls, and said that women candidates were assaulted and their clothes torn.

“This type of lawlessness that the U.P. government is itself spreading is because it has totally failed. Their arrangements for the second wave of corona were poor,” Ms. Vadra said.

After landing at Lucknow airport, Ms. Vadra garlanded the statue of Mahatma Gandhi in the Hazraganj area of Lucknow, and was then scheduled to address media at the party office before conducting meetings. However, she sat on an apparently impromptu silent protest near the statue for two hours against the Yogi Adityanath government. A large number of Congress supporters joined her at the site.

Ms. Vadra further said that the attack on democracy and the Constitution has reached a new low in U.P., where the administration and police were being used to destroy democracy.

“We have come to stand in favour of democracy and speak for the people,” she said.

She later met farm leaders and discussed the three new farm laws, and also held a meeting with the State office-bearers of the party.

Ms. Vadra explained why she decided to hold a silent dharna. She said it was to draw the attention of the people of the country to the destruction of the Constitution in U.P. while democracy was being disrobed.