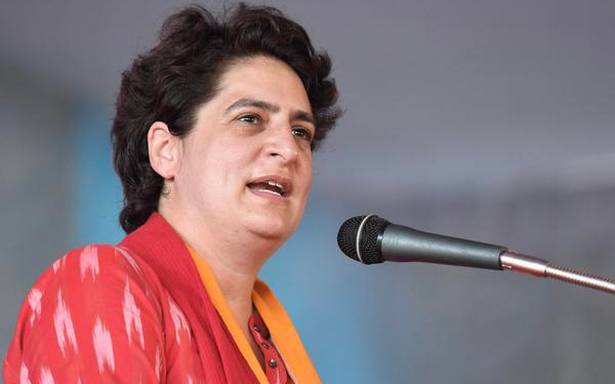 The Congress would focus on inflation and unemployment in the first phase as the party’s nine-member committee to plan ‘sustained agitations’ on national issues met for the first time on Tuesday.

Though there was no official briefing on what was discussed, sources said leaders gave their suggestions in terms of issues that the party can raise among the people.

Ms. Vadra, who mostly focussed on Uttar Pradesh, is said to have argued that the Congress should undertake door-to-door campaign on issues like price rise as it affects every household.

Mr. Bora, Rajya Sabha MP from Assam, is said to have argued that agitations need the face of a strong leader and suggested that former party chief Rahul Gandhi should play that role.

Leaders also argued that mass awareness campaigns should be first undertaken and then agitational programmes like strikes and protest marches should follow.

A host of issues including the farmers’ agitation, crime against women, Rafale, Pegasus and alleged misuse of probe agencies were also discussed.

“We should find out why the youth are not coming out on the streets despite such high levels of unemployment,” said a leader, who attended the meetings.

Earlier this month, party president Sonia Gandhi had constituted the nine-member panel to plan and execute sustained campaigns against the policies and ‘misgovernance’ of the Narendra Modi government and translate such campaigns into political support in the run up to the 2024 Lok Sabha polls.

On August 20, Ms. Gandhi had also chaired a virtual meeting of 18 Opposition parties and had given a call for joint action against the Modi government between September 20 and 30.

But the larger plan is phase-wise agitation until the 2024 Lok Sabha elections and channelise the anger by working with civil society activists, NGOs and voluntary/social organisations working in specific areas.

The party wants to replicate the template that the Congress-led United Progressive Alliance (UPA) government faced during Anna Hazare’s anti-corruption movement. Mr. Hazare was backed by several organisations including the Rashtriya Swayamsevak Sangh and activists like Arvind Kejriwal.

“The Congress will not only agitate on the roads but will also prepare public opinion,” Mr. Singh is learnt to have told his colleagues.

Mr. Udit Raj also strongly argued for electing Mr. Gandhi as the party president again and also said to have raised the issue of rejecting EVMs for the next Lok Sabha polls.