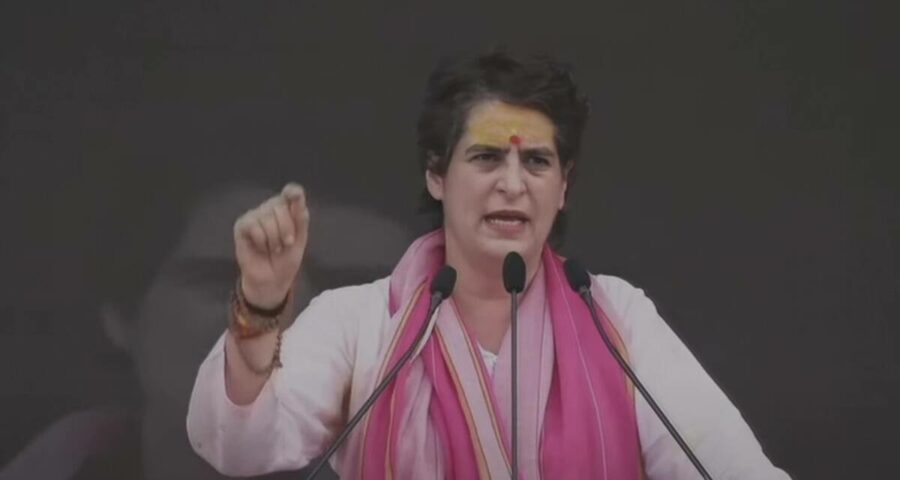 Addressing the ‘Kisan Nyay’ rally in Varanasi, Priyanka Gandhi further said, "Farmers are protesting because they know that their income, land and crops will go to the billionaire friends of this government." Launching a scathing attack on the BJP government over the deaths in Lakhimpur Kheri, AICC general secretary Priyanka Gandhi on Sunday said that the government is “shielding” Union MoS Ajay Mishra’s son Ashish, and the Centre has never listened earnestly to issues being faced by the farmers.

“Last week, the son of Union MoS (Home) mowed down six farmers with his vehicle. Families of all the victims said they want justice but all of you have seen is that the government is shielding the minister and his son? Have you seen in any country that a person who mowed down six people is being ‘invited’ by the police to talk to them?” Gandhi said while addressing the ‘Kisan Nyay’ rally in Varanasi.

She added, “The CM is shielding the minister from a public forum. The Prime Minister came to Lucknow to see the performance of Uttam Pradesh and Azaadi Ka Amrit Mahotsav but couldn’t go to Lakhimpur Kheri to share the grief of the victim families.

On Saturday, Ashish Mishra, who is facing murder charges over the Lakhimpur Kheri incident, was arrested after questioning.

Around 11 pm at night, DIG Upendra Kumar Agrawal, heading the SIT, told reporters, “We found that he was not cooperating. He was not telling certain things. On ground of non-cooperation and evasive replies, we are taking Ashish into custody. He will be produced in court tomorrow. We will do sustained custodial interrogation.”

Seeking to further step up the heat on PM Modi over the farmers issue, Priyanka said that the Centre has not paid heed to their protests and never tried to listen earnestly to their demands.

“Farmers are protesting for over 300 days, during which time more than 600 of them have died. They’re protesting because they know that their income, land and crops will go to the billionaire friends of this government. PM Modi can tour the whole world but can’t meet farmers to address their issues,” she said.

Earlier this week, Priyanka had traded barbs with the UP CM over her act of sweeping the guest house in Sitapur where she was detained .

Adityanath, in a TV interview, had said on Friday that the public has left her worthy of only cleaning floors.

Priyanka then reached a Valmiki temple in a Dalit colony here and cleaned its premises with a broom. She said Adityanath’s remark was not against her but crores of women, Dalits and safai karamcharis, who proudly keep the houses and cities clean.

Priyanka said the CM has humiliated those engaged in cleaning and sanitation work. She told people in Luv Kush Nagar: “He has not humiliated me by saying so, he has humiliated you all as crores of Dalit brothers and sisters are safai karamcharis and they do this work.”

That is the reason, Priyanka said, she decided to personally clean the Valmiki temple to show that there is nothing wrong in doing the work.

At the ‘Kisan Nyay’ rally, the AICC general secretary, who had been detained by the UP Police last Monday while on her way to meet the kin of four farmers who died in Lakhimpur Kheri, further claimed that the government is working only for the interests of corporates.

Addressing the people, she said, “Just ask yourself: have the promises that were made to you been fulfilled? Has development come to your doorstep? If not, you can stand with me and say it is the time to bring change now.”

Earlier in the day, the Congress party had tweeted that it has sought an appointment with President Ram Nath Kovind for a 7-member party delegation led by Rahul Gandhi to present a detailed memorandum on the facts of the Lakhimpur Kheri incident. However, minutes later, the tweet was deleted by the party.