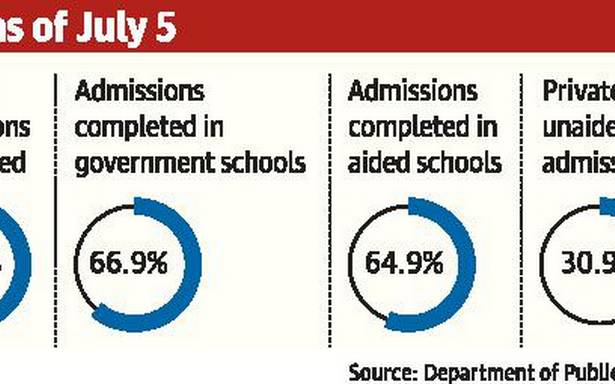 As the new academic year commenced on July 1, private unaided schools in the State are lagging in completing their admissions process. According to data by the Department of Public Instruction (DPI), as of July 5, only 50.4% of admissions across all school managements has been completed.

On the other hand, admissions completed in government schools are the highest, with 66.9 % of them being fed in the Student Achievement Tracking System (SATS) portal.

While many parents of children in private unaided schools have not completed the admission formalities as they are unable to pay the fees during the pandemic, many others are waiting for the State government to take a call on the fee structure .

Last year, the government had stated that schools can collect only 70 % of the tuition fees of the 2019-2020 academic year.

“Most parents had already paid the full fees by then and did not get a refund. So, many parents have not admitted their students and are adopting the wait and watch policy,” said Girish S., parent of a class VI student.

D. Shashi Kumar, general secretary of Associated Managements of Primary and Secondary Schools in Karnataka, said many parents are not coming forward to complete the admission process as they are refusing to pay the fees.

“There is a lot of pressure by officials of the department to complete the admission process. Last year too, many parents did not pay fees, but we admitted the students. We do not want to continue that this academic year,” he said.

He also alleged that many government school teachers were “pressuring” parents of students, who were temporarily in their hometown during the pandemic, to admit them in the nearest government school even though they were on rolls in private schools in Bengaluru.

V. Anbu Kumar, Commissioner for Public Instruction, said that the department had decided not to automatically admit students . “We have asked all schools – even government school teachers – to admit students for all classes from I to X this year. Normally, they would only admit students for class I and the remaining students would be automatically promoted. But due to the pandemic, families may have migrated and we want to track all the students and ensure that the number of dropouts are tracked so that they can be re-enrolled in schools,” he said.