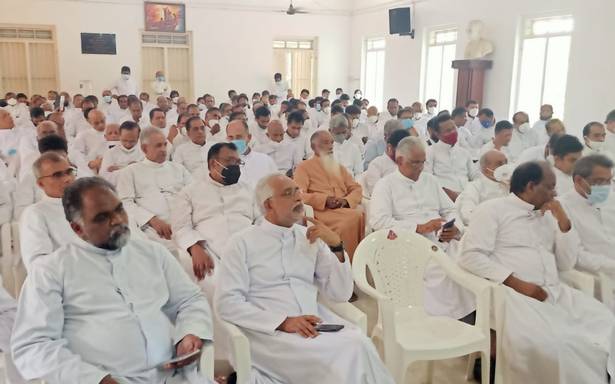 Nearly 200 priests turned the otherwise celebratory mood of Christmas to stage a protest even as the controversy over whether to conduct the mass facing the altar or the congregation continues to rage.

The fasting was held alongside the crib in front of the headquarters of the Ernakulam-Angamaly Archdiocese. The protest, the priests said, was against the alleged suppression and forceful enforcement of liturgical order by Cardinal Mar George Alancherry, Major Archbishop of the Syro-Malabar Church, and the Synod members.

They claimed that more priests participated in the fast from the countries they were were located at. The fast, the priests said, was to announce aloud that the peace in the Church is achieved through unity and that the forceful enforcement of decisions by bishops without taking into confidence the priests and the devotees was against Christianity.

The fast is also to express the protest and grief against the decision taken arbitrarily by the Syro-Malabar Synad to replace the mass facing the congregation by the one facing the altar. It amounts to the negation of the liberal right of conducting the congregation-facing mass by the second Vatican Council.

At a time when even the original Chaldean Church had abandoned the outdated Chaldean order to adopt one in tune with the modern era and culture, Syro-Malabar Church, under the influence of the southern lobby, had gone back to the primitive order, the protestors said. The fast is also to declare that we will not bow to the ways of the obstinate traditionalists, a release issued by the protesting priests said.

A few bishops of the Syro-Malabar at the Synod were trying to push and enforce their vested interests on others. This is a prayer mission against some bishops openly intervening in party politics like never before and even unabashedly engaging in communal campaign for their personal interests, the release alleged.

This is also a silent protest against the Syro-Malabar Church, which in the past had taken the initiative for communal harmony and secularism, adopting the line of religious extremists to antagonize people from other beliefs. The fast is an attempt to sow the seeds of humanity and spirituality among the Syro-Malabar Church forgetful of the message of the Christ, the release said.