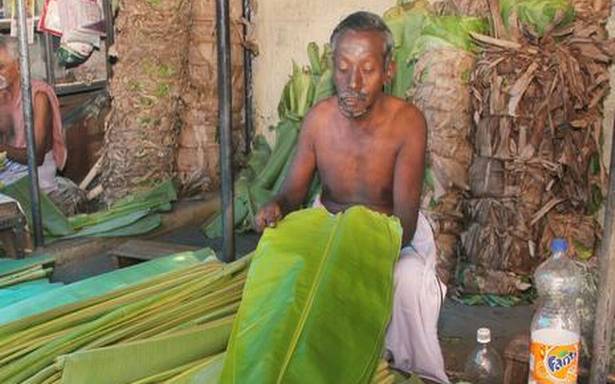 ‘Restrictions on public gathering has resulted in low sales’

For banana farmers of Madurai district, the surge in COVID-19 positive cases could not have come at a worse time. Following the imposition of restrictions regarding festivals and weddings on a grand scale, there has been a significant fall in prices of banana leaves, causing severe distress to farmers and traders.

S. Vairamani, a trader at Mattuthavani vegetable market, said that while a bundle of 500 banana leaves was sold at around ₹1,000 a month back, the price has come down to around ₹300. The fall in price is attributed to higher supply but lower demand for the leaves.

In addition, the cutting cost and transportation cost for taking banana leaves to the market makes it financially unviable for farmers to sell the leaves, said P. Gnanasekaran, a farmer from Mullipallam in Sholavandan. “The farmers are unable to earn any profits after paying for the transportation and cutting costs. Hence, many farmers are refraining from cutting the banana leaves from their fields," he added.

The government can increase the number of participants in weddings, which will in return increase the demand for banana leaves, he suggested.