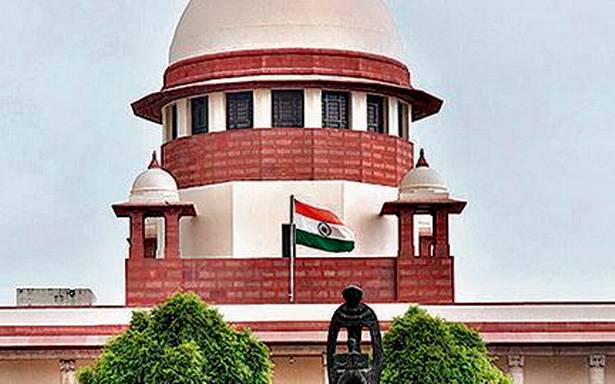 Preventive detention, the dreaded power of the State to restrain a person without trial, could be used only to prevent public disorder, the Supreme Court held in a judgment on Monday.

“Preventive detention is a necessary evil only to prevent public disorder. The court must ensure that the facts brought before it directly and inevitably lead to a harm, danger or alarm or feeling of insecurity among the general public or any section thereof at large,” a Bench led by Justice Rohinton F. Nariman observed.

The State should not arbitrarily resort to “preventive detention” to deal with all and sundry “law and order” problems, which could be dealt with by the ordinary laws of the country.

“Whenever an order under a preventive detention law is challenged, one of the questions the court must ask in deciding its legality is: was the ordinary law of the land sufficient to deal with the situation? If the answer is in the affirmative, the detention order will be illegal,” Justice Nariman wrote.

The court said two drunks fighting on a road was a law and order problem, and not ‘public disorder’. The solution here was not preventive detention.

Preventive detention must fall within the four corners of Article 21 (due process of law) read with Article 22 (safeguards against arbitrary arrest and detention) and the statute in question, Justice Nariman said.

“Liberty of a citizen is a most important right won by our forefathers after long, historical and arduous struggles…We must confine the power of preventive detention to very narrow limits, otherwise the great right to liberty won by our Founding Fathers, who were also freedom fighters, after long, arduous and historical struggles, will become nugatory,” the court noted.

“Mere contravention of law, such as indulging in cheating or criminal breach of trust, certainly affects ‘law and order’, but before it can be said to affect ‘public order’, it must affect the community or the public at large,” Justice Nariman stated.

The judgment cane in an appeal filed by the wife of a man placed under preventive detention under the Telangana Prevention of Dangerous Activities Act shortly after he was granted bail in a cheating case.

The Supreme Court said the State should have contested the bail order in a higher court rather than slap an Executive order of preventive detention on him on the ground that, if set free, he would cheat more people.

“This may be a good ground to appeal against the bail order, but certainly cannot provide the springboard to move under a preventive detention statute. We, therefore, quash the detention order,” the court ordered.