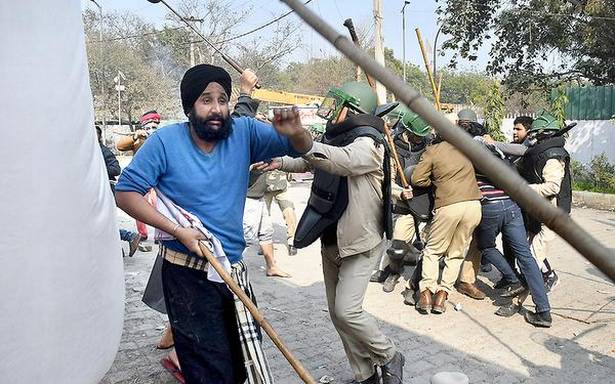 Not ready to ‘abandon’ stir at this point, insist protesters

Following clashes with groups of people, who claimed to be locals, and despite a heavy deployment of security forces at the protest site, the farmers present at the Singhu border have refused to budge. They said they are prepared to face intimidation from all quarters.

Referring to the stand-off between farmers and the police at the Ghazipur border on Thursday night, several protesters maintained that they were not ready to “abandon” the protest at this point.

Ranjeet Singh, a farmer from Punjab’s Jalandhar district, said: “The stand-off, in a way, has worked in favour of the agitation. Similarly, several more trolleys are on their way from Mohali to the border. Now on, whenever there is a call, people will assemble in large numbers at the borders.”

Stating that the farmers were ready to go down resisting the forces, Rajbeer Singh, a farmer from Punjab’s Fatehgarh Sahib district, said: “Death will be staring at us even at home if the laws are implemented. Our intention is not to hurt anyone. All we want is for the three laws to be repealed. If the government is bent on killing us, then we are ready for that as well.”

“The movement is not just about farmers. Every citizen should be concerned as everyone will be affected. We are not the ones threatening people and we are also not scared of any adverse outcome. The government thinks they can scare us by stopping langars and resorting to other means. But we are not scared. What will we teach our children if we return now?,” asked Mr. Singh.

Gurmukh Singh, another farmer from Fatehgarh Sahib, said: “The increased presence of forces has changed nothing. They want the stage near the entrance removed. But the people sitting here are unaffected by their presence. We are not going to move till the laws are repealed.”

Another farmer, Gurparashad Singh, added, “Are we supposed to be scared? Our determination is the same and we want the three laws repealed.”