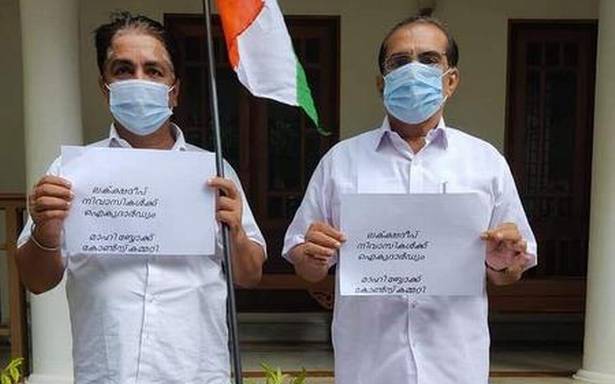 The new regulations imposed by the Administrator were aimed at imposing the RSS and corporate agenda of the Union government, PCC president, A. V. Subramanian said in a statement

The Pradesh Congress Committee has demanded the recall of the Administrator of Lakshadweep, Praful Koda Patel, for spoiling the prevailing peace in the island by introducing the “agenda of Sangh Parivar and corporates.”

Regulations including penalising the buying or selling of beef, introduction of alcohol under the guise of promoting tourism, the Goondas Act and law to disqualify those with more than two children from getting elected to the gram panchayat were aimed at imposing the RSS and corporate agenda of the Union government, PCC president, A. V. Subramanian said in a statement on Monday.

The ‘reforms’ introduced by the Administrator were against the larger interests of the indigenous people residing on the island. Beef was one of the staple foods of the people while the archipelago has a history of very low crime rate.

The new policies proposed by the Administrator were in sync with Union government’s larger agenda to “destroy” the pluralistic nature of our society, he said.

Meanwhile, Congress leaders in Mahe organised a protest on Monday to condemn the anti-people policies of the Administrator. Party workers holding placards ‘Save Lakshadweep,’ organised the protest in front of their residence, said a PCC functionary.