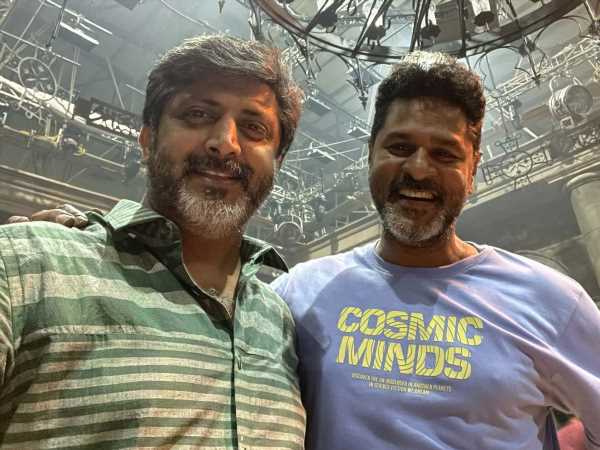 The shooting of Megastar Chiranjeevi and director Mohan Raja’s Godfather are going on at the brisk pace.  Godfather is the official Telugu remake of the Malayalam super hit film, Lucifer. The original, directed by Prithviraj Sukumaran, starred Malayalam superstar Mohanlal, Manju Warrier and Vivek Oberoi in lead roles. The recently released teaser of  Godfather impressed fans and audiences much. Now, the film’s director Mohan Raja has come up with a new update about Chiranjeevi starrer.

Mohan Raja took to Twitter and shared a photograph of him with the choreographer and director Prabhu Deva, and revealed that  latter is  choreographing a song in Chiranjeevi starrer Godfather. The director also announced that the shoot for the song started last night.

Mohan Raja tweeted, “Today is more special First time working with the legend and director of #Nuvvosthanantenenodhantana @PDdancing on the day of #16yearsofunakkumenakkum On the sets of #Godfather.

Lady superstar Nayanthara has been roped in to play the female lead role. The political action drama also has Satya Dev, Puri Jagannadh, Sunil,  and others in key roles.  Satyadev Kancharana and Gangavva will also be seen as pivotal characters.  Salman Khan is playing a cameo in this big budget drama which  is produced by Konidela Production Company and Super Good Films, and it has the music by Thaman.