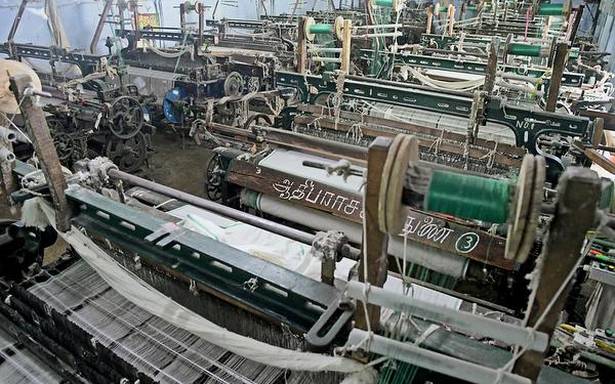 With 30,000 power loom units involved in producing rayon fabrics halting production from February 11 to 21 in the district, power loom owners want yarn price to be controlled and necessary steps taken to encourage export.

Of the 55,000 units in the district, unit owners in Erode, Chithode, Lakkapuram and Veerappanchatiram halted production as they claim that regular increase in price of yarn is causing them a loss of ₹5 per metre. They said that about 24 lakh metres of rayon fabric produced in these units everyday were halted affecting over 50,000 workers directly and indirectly. On Friday, the price of yarn was ₹215 a kg that was ₹150 a kg in November, 2020.

B. Kandavel, coordinator, Tamil Nadu Federation of Power Loom Association, said that production of ₹7.5 crore worth fabrics were affected everyday and wanted the price of yarn to be fixed once in a month. “The raw material cost (yarn) is very high in the country and hence we were unable to compete both domestically and globally”, he said and wanted the Central government to import yarn from neighbouring countries.

Countries like Vietnam and Bangladesh were able to sell their produce at low price globally whereas we were unable to market our products due to high production cost. “The government should not levy anti-dumping duty on yarn imports so that increase in supply will bring down the price of yarn”, he said and wanted steps to be taken to boost export.