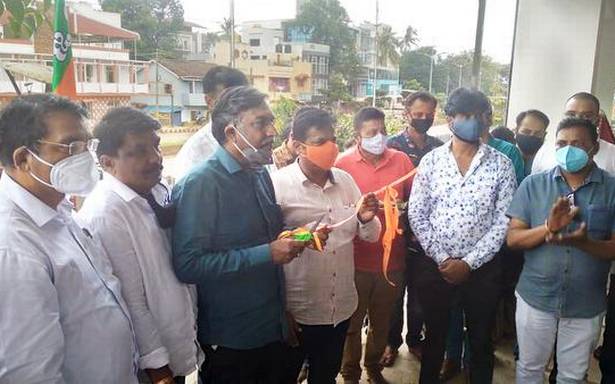 With the announcement of elections to the Belagavi City Corporation Council, political activities have gained momentum in all major parties in the city. Polling, scheduled for September 3, promises to be different as this is the first time in decades that the urban local body polls will be contested on party affiliations. The BJP was the first to declare that it will fight the polls based on party ticket. State BJP president Nalin Kumar Kateel and other party leaders held a meeting with city unit leaders a week ago. Member of Legislative Assembly Abhay Patil, who inaugurated the campaign office at Goaves here on Sunday, expressed the confidence that the city’s Mayor and Deputy Mayor will be from the BJP.

The Janata Dal(S) then said that it will field candidates in all the 58 wards. Aam Aadmi Party and the Bahujan Samaj Party also made similar announcements. There are reports that the AIMIM will field its candidates, though there is no official announcement yet. The Congress was the last to make the announcement. The party leaders held several meetings with local leaders. Senior leaders B.K. Hariprasad, Syed Nasir Hussein, L. Hanumantiah and M.B. Patil held four meetings with Satish Jarkiholi, Lakshmi Hebbalkar, Firoze Sait and others. KPCC working president Satish Jarkiholi announced on Saturday that the party’s first list of probable candidates will be out by Monday, giving them enough time to campaign. To a query, he said that the Congress will not entertain leaders who are likely to defect from the Maharashtra Ekikaran Samiti. “We will not give ticket to any candidate who wants to fight polls on linguistic lines, whether they are followers of the MES or not,” Mr. Jarkiholi said.

Observers say that the central point of the polls will be the influence that the MES will have on the minds of the voters. The MES has been playing a key role in the elections to the city corporation and the erstwhile Belagavi Town and City Municipal councils since the 1950s. In the last council, the MES won over 60% of the seats. Its influence on the voters had forced the other parties to abandon their symbols and encourage their candidates to contest as independents. The MES is a single-agenda party that has been demanding the merger of Marathi-speaking towns and villages, in all border districts from Belagavi to Bidar, into Maharashtra.

MES leaders Prakash Margale and Shubham Shelke, who addressed a media conference in Belagavi on Sunday, argued that the MES will continue its winning streak.

“We have not suffered any disadvantage with the increase in the number of wards,” Mr. Margale said. “We will win over 45 of the 58 seats,” he said. Mr. Margale dismissed reports that the rise of the BJP and increased awareness among young people had led to a reduction in the influence of the MES over voters in the city. “Far from it, we are seeing an unprecedented support among young people to the Marathi cause,” he said.

Mr. Shelke said that the influence of the MES is already visible. “Everyone knows we are winning. We are already seeing strong candidates from national parties seeking our ticket. There is no way our activists will go to the Congress or the BJP seeking ticket,’’ he said. Mr. Shelke, a young Marathi activist, had managed to get over one lakh votes in his fight against Mangala Angadi of the BJP in the Belagavi Lok Sabha bypolls.