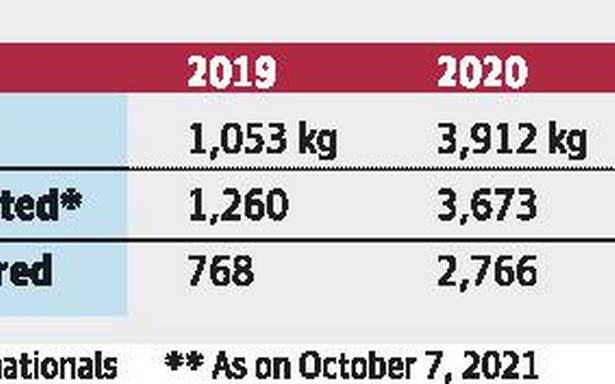 From monitoring the trade of synthetic drugs on the darknet to rounding up peddlers and dealers smuggling marijuana and cocaine into the city through more traditional channels, the Benglauru police have been on their toes trying to keep a check on the growing pervasiveness of the drug-trafficking industry.

Till October 7 this year, the city police had registered 3,337 cases related to narcotics, seized 3,255 kg of drugs and arrested 4,210 persons. This is the highest number of arrests and seizures in the last few years.

It’s no coincidence that the number of drug-related cases rose during the first two waves of COVID-19 infections. “During the pandemic, drug dealers took advantage of the uncertainty and the fact that police personnel were assigned to COVID-related duties. Even during lockdown, they tried to peddle drugs as movement of essential items were allowed,” said a senior police official.

Though there has been a steep increase in synthetic drugs, marijuana peddling is still the highest in the city compared to other forms of narcotics, and accounts for more than 90% of the total seizures so far in 2021. “This is because of its easy availability, and is smuggled into the city from neighbouring States,” said the police official. Data from the Bengaluru City Police show that as on October 7, 2021, the police have seized 3,182.6 kg of marijuana from peddlers and consumers. In 2019, of the total seizure of 1,053 kg, marijuana accounted for 1,047 kg.

The rise in seizures also coincides with the city police’s action against the use of narcotics, including raids on rave parties. In 2020, the Central Crime Branch had conducted a high profile investigation into the alleged use of drugs within the Kannada film industry.

The investigation uncovered a nexus between DJs, event managers, actors and socialites. “In order to convey a clear message and to eradicate drug abuse, more than ₹50 crore of drugs were dispatched for destruction,” said Mr. Pant.

The special drive launched against the drug-related cases is not only to crack the whip on the peddlers and consumers but also put an onus on the police officers which led to crack maximum number of cases . According to a senior police officer, the jurisdictional police officers under whose jurisdiction the case of peddling and consumption is reported, have been asked not to come to the station until he or she cracks the cases.

LSD strip seizures double in less than one year

Over the last year, the Central Crime Branch has been cracking down on the purchase and sale of drugs on the Darknet. Besides monitoring social media platforms, police teams scan parcels shipped to Bengaluru from other countries to check for psychotropic substances concealed (often done without the knowledge of courier companies) in the contents.

Ecstasy and Ya-Ba pills and LSD are some of the more sought-after narcotics. In less than a year, the number of LSD strips seized has more than doubled from 5,049 in 2020 to 11,204 this year. MDMA seizures have increased by a whopping 546% during the same period. Demand for Ecstasy and Ya Ba pills has also increased from 1,539 two years ago to nearly 7,600 in 2021.