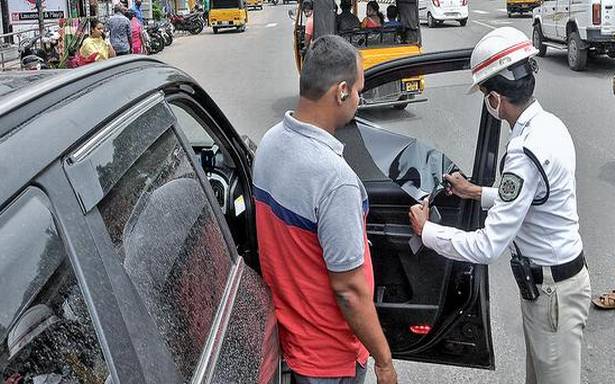 The crackdown on motorists for unauthorised use of stickers on their vehicles such as police, press, MLA and others, has been intensified by the police and on a daily basis about 80 to 100 cases are being booked.

The drive began on September 10.

On September 10 and 11, the traffic police teams have caught 191 persons driving two-wheelers and four-wheelers who were found using stickers in an unauthorised manner. Among the total cases, 72 persons were caught using police stickers, while 81 persons were found to have pasted ‘Press’ stickers.

As many as 24 persons were caught having MLA stickers on their cars illegally, while four were found using MP stickers.

“People claim that their relative works in the Police Department or is a media personnel when caught. An MPP who is known to an MLA has pasted MLA sticker on his four-wheeler,”said Inspector (Traffic) Ch. Shanmukha Rao from Dwaraka sub- division, who is part of the task force team.

He also said that a few were caught using defence stickers because their relative works in the Defence sector somewhere in northern States.

The police also intercepted a vehicle on which the driver painted ‘AP Secretariat’ which was also found to be unauthorised after verification,” adding that such misuse of stickers is a serious traffic violation.

On Saturday afternoon, the traffic police intercepted a four-wheeler at Maddilapalem Junction which had a sticker of RTO (Regional Transport Office). Police found that there was no officer in the vehicle, but it was only a driver. When asked for proofs for verification, the traffic police found that the car did not belong to any officer, but a staff working in the Transport Department. Moreover, the staff works in East Godavari district, and not Visakhapatnam district.

A senior traffic police official from the city said that generally people use these stickers to avoid vehicle checks and some miscreants do this to skip charges at toll gates and parking lots.

Additional Deputy Commissioner of Police (Traffic) Ch. Adinarayana said that police would verify asking some identity/proof in case they find any such stickers. Such stickers should be used only by relevant persons and only on official duties. Misuse of such stickers is a traffic violation, he said.

“As of now, we are creating awareness and counselling about the violations, apart from removing the stickers on spot. The police are also explaining the consequences of using such stickers in an unauthorised manner. In the coming days, we will book cases under the MV Act,” he added.