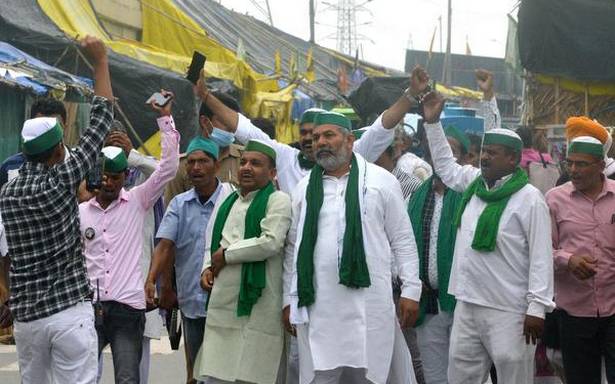 Haryana Police on Saturday resorted to baton-charge on a group of farmers protesting against the visit of Chief Minister Manohar Lal and other BJP leaders in Haryana’s Karnal, the Assembly constituency of the Chief Minister.

On a call given by the Bharatiya Kisan Union, anguished farmers blocked several highways, including the Fatehabad-Chandigarh, Jind-Patiala, Ambala-Chandigarh and the Hisar-Chandigarh national highways. Vehicular traffic was hampered at several places following the blockades.

“An event was scheduled today in Karnal, in which the Chief Minister and BJP leaders were to participate. As a part of our ongoing agitation against the new farm laws, we had decided to peacefully oppose and demonstrate against the BJP leaders. In this series, farmers assembled at Bastara toll plaza, near Karnal. But they were lathicharged by the police without any provocation. Several farmers have been seriously injured,” said Gurnam Singh of Bharatiya Kisan Union (Chaduni).

“I appeal to all farmers across Haryana and neighbouring States to block toll plazas on national and State highways, wherever possible. We will continue to block roads until the protesters arrested in Karnal are released,” he said in a video message.

Mamta Singh, Inspector General of Police, Karnal Range, told The Hindu that mild force was used by the police after protesters blocked the national highway near Bastara. “There was heavy traffic congestion and inconvenience to the public. We made several announcements asking the protesters to clear the road. Section 144 of CrpC, restricting assembly of five people or more, was already in place. But despite our repeated requests, the protesters were refused to budge. Stones were thrown at the police and thereafter, to maintain law and order, very mild force was used,” she said.

“Ten police personnel and four protesters were injured in the incident,” she said.

Yogendra Yaday of the Samyukta Kisan Morcha (SKM), the umbrella body of farmer unions spearheading the ongoing farmers’ protests against Centre’s farm laws, said in a tweet that the ‘lathicharge’ had exposed the true face of Haryana police.

Leaders of the BJP and its coalition partner in Haryana, the Jannayak Janta Party (JJP), have been facing farmers’ backlash in the past few months on the Centre’s farm laws. Farmers’ outfits have announced that all legislators, including Independents, who have been supporting farm laws would be boycotted and not allowed entry into villages across the State.

Scores of farmers have been camping at several places at Delhi’s borders for over nine months now, demanding the repeal of the laws.