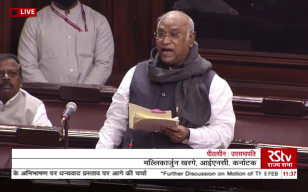 Disappointed with lack of solution to farmers’ agitation, says Opposition.

The Congress on Monday said Prime Minister Narendra Modi’s reply in Rajya Sabha to the motion of thanks to the President’s Address had neither substance nor offered any solution to the on-going farmers’ agitation over the new farm laws.

On Mr. Modi’s comment that the people didn’t understand the contents of the farm laws, senior Congress leader Mallikarjun Kharge termed it “misleading”, and asked, “Are we all fools?”

The Congress leader also claimed that in response to a written question asked by him on February 2, the government admitted that India was among countries with the highest COVID-related deaths.

“In the wake of the farmers’ agitation, we expected that the Prime Minister would take back the laws and bring them back to Parliament after consulting with all the stakeholders. But he didn’t mention that. He only said people are agitating without understanding the contents of the law. Is it possible,” said Mr. Kharge.

“He is misleading everyone by saying that people don’t know what is in the laws. Are we all fools,” he asked.

Mr. Gohil said the people were hoping for a solution to the over 70 day farmers’ protests but the Prime Minister had disappointed everyone and forced the Opposition to walkout after his speech.

“Farmers have only met with disappointment and it is unfortunate that the government has not been able to understand the gravity of the situation… It looks like farmers will have to be prepared for a long battle ahead,” said Mr. Hooda, who represents Haryana in the Rajya Sabha.

Separately, Congress’ chief whip in the Upper House, Jairam Ramesh, countered Mr. Modi’s new definition of FDI with his own.

“In Parliament today, PM Modi said FDI is also ‘Foreign Destructive Ideology’. This from someone whose governance has been based solely on FDI — Fear, Deception, Intimidation,” Mr. Ramesh tweeted.