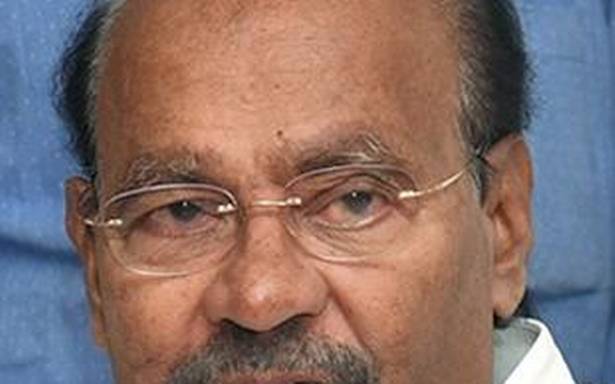 PMK founder S. Ramadoss on Friday strongly condemned the State government’s decision to allow the opening of Tasmac shops from 10 a.m. to 5 p.m. during the extended lockdown period till June 21.

In a Twitter post, he said the decision goes against the interest of the people and would lead to spread of COVID-19, at a time when the State is showing a declining trend in the number of cases.

Dr. Ramadoss also said the move to allow spas, salons and beauty parlours would also lead to an increase in the number of cases. The DMK had opposed the AIADMK government’s move to open Tasmac shops last year and that it was committing the same mistake now.

Poor families would lose their income and get pushed to poverty due to the opening of Tasmac shops and it would also result in an increase in atrocities, Dr. Ramadoss added.

He urged the State government to roll back the decision and focus on implementing prohibition.

On securing the release of Rajiv Gandhi assassination case convicts, Dr. Ramadoss said the doors of the Raj Bhavan in Chennai should be knocked and not those of the Rashtrapati Bhavan.

In a statement, he said hat June 11 marked the completion of 30 years of their arrest and alleged that the Raj Bhavan had been playing a hide-and- seek game on the issue and it was condemnable.

Referring to Chief Minister M.K. Stalin’s letter to the President last month on the issue, Dr. Ramadoss said leaving it to the President would delay the release of convicts and would amount to compromising on the State’s rights. The courts had pointed out that the Governor had the authority to decide, he said.

Mr. Ramadoss urged the Chief Minister to write to the Governor to quickly decide on the recommendation made by the previous government to release the convicts and stress on this in person. He said the State government should appoint a counsel well versed in human rights to handle the case in the Supreme Court.