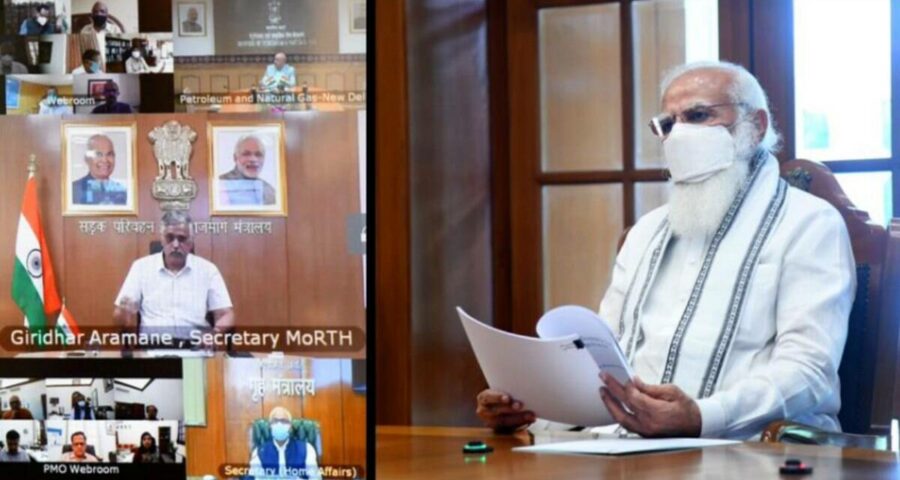 PM also said that states must act against any hoarding of oxygen and directed officials to ensure that the oxygen supply to various states happens in a smooth, unhindered manner and called for fixing responsibility with the local administration in cases of obstruction. Chairing a high-level meeting to review oxygen supply across the country, Prime Minister Narendra Modi on Thursday asked top officials to work rapidly on increasing its production, boosting the speed of distribution and using innovative ways to provide oxygen support to health facilities.

PM also said that states must act against any hoarding of oxygen and directed officials to ensure that the oxygen supply to various states happens in a smooth, unhindered manner and called for fixing responsibility with the local administration in cases of obstruction.

In the meeting that also discussed ways and means to boost oxygen availability amid demands from many states for an increase in its supply, Modi was told that the supply of life-saving gas to states has been steadily increasing.

Against the present demand from 20 states of 6,785 MT/day of liquid medical oxygen, the Centre has from April 21 allocated 6,822 MT/day to these states, a statement said.

It was noted that in the last few days, the availability of liquid medical oxygen has been increased by about 3,300 MT/day with contributions from private and public steel plants, industries, oxygen manufacturers as well as through prohibition of supply of oxygen for non-essential industries.

Modi said states should come down heavily on hoarding and stressed the need to ensure faster transportation of oxygen.

The statement said railways is being used for rapid and non-stop long-distance transport of tankers.

The first rake has reached from Mumbai to Vizag to transport 105 MT of the liquid medical oxygen. Similarly, empty oxygen tankers are also being air-lifted to oxygen suppliers to reduce one-way journey time in oxygen supply.

The prime minister was informed that an elaborate exercise is being done in coordination with states to find their demand for oxygen and ensure adequate supply accordingly, the statement said.

Top officials representing various ministries informed Modi that they are working together with the states to operationalize the sanctioned PSA oxygen plants as soon as possible.

“PM directed the officials to ensure that oxygen supply to various states happens in a smooth, unhindered manner. He spoke about the need to fix responsibility with the local administration in cases of obstruction. He also asked ministries to explore various innovative ways to increase production & supply of oxygen,” it said.

Various measures are being undertaken to rapidly increase the availability of cryogenic tankers through conversion of nitrogen and argon tankers, import and airlifting of tankers as well as manufacturing them, it added.

Representatives from the medical community also spoke about the need for judicious use of oxygen and how an audit in some states has decreased oxygen demand without affecting the condition of patients.

The meeting was attended by the Cabinet Secretary, Principal Secretary to PM, Home Secretary, Health Secretary and officials from the Ministry of Commerce & Industry, Ministry of Road Transport, Pharmaceuticals and NITI Aayog.