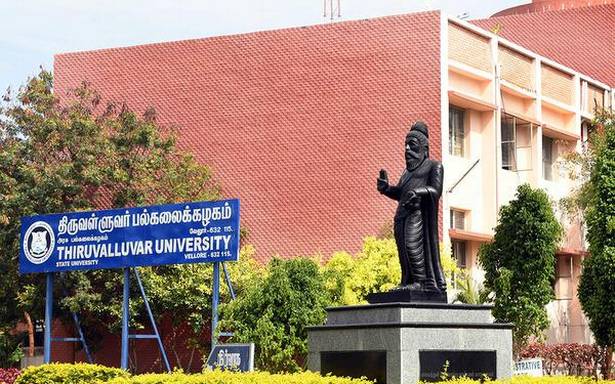 Several Ph.D. candidates at the final stages are unable to complete their work as their supervisors have retired; a teachers’ body has appealed to the Higher Education Secretary to intervene

Around 50 Ph D scholars of Thirvalluvar University are worried, as the institution is yet to complete formalities to enable them to earn their degree.

These candidates are in various stages of completing their course work, but are suffering as their supervisors have retired.

The Aided College Teachers’ Association (ACTA) has written to the Higher Education secretary appealing for relief for the scholars.

“The Ph.D. scholars are subjected to mental agony, harassment and depression owing to the frequent and arbitrary changes in the rules and regulations by the authorities, without adhering to the University Grants Commission’s statutory provisions regulations,” ACTA’s general secretary T. Balasaravanan, has said.

The students’ theses have not been adjudicated “on the pretext that their supervisors have retired from service,” though the usual practice is to permit the supervisors to conduct the viva even if they are not in service, he added.

A candidate who submitted his thesis in a Humanities subject was supposed to complete his viva four months ago. “My viva was stopped as the guide had retired. I only want to complete the work. I have been working for 12 years as a guest lecturer in a government college,” he said. With a Ph.D,, he would be eligible to apply for a full-time job with a better salary, he said. “All my files are with the University. How can I take up the issue without jeopardising my chances of finishing the degree? I only want to complete my work,” he said.

A former syndicate member who is guiding several students said the Vice Chancellor had constituted a sub-committee, and called for details of Ph.D. scholars, which had been submitted.

“The issue was supposed to have been tabled at the Syndicate meeting on Monday but at the last minute it was taken off the agenda. Around 48 to 50 candidates are in different stages of completion of their course work. Two of my candidates did not get their career advancement benefits because of this. Some students’ viva was cancelled even after notification. One student is waiting to complete the degree. If he completes it, then he will get a job with ₹25,000 as salary,” he said.

The Thiruvalluvar University Act has no provision for Ph.D. registration.

H. Devaraj, former vice chairman of the University Grants Commission, which frames rules for all universities said State universities could adopt the parent University of Madras regulations if they have not framed rules.

The UGC guidelines do not permit a professor with less than two years to retire, to accept candidates for Ph.Ds. According to him, if a supervisor has retired then the department head should make alternative arrangements. If a candidate had completed the process and was awaiting completion of final formalities then “the V-C can suggest a name for viva voce. But there should be a subject expert. Even the department head can conduct the viva voce,” he said.