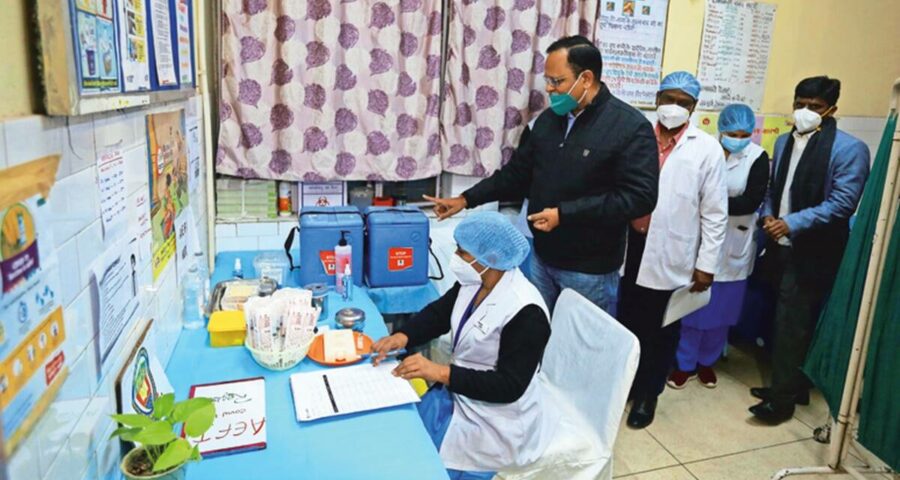 On Wednesday Sunderbani became the first of the 19 blocks in the border district to record 100 per cent vaccination in the 45-plus age group after a medical team, accompanied by police personnel, trekked to the village on a now-or-never mission – and returned with success. A VILLAGE of roughly 40 Gujjar families on a hilltop posed the sole challenge for weeks to authorities in a block in Jammu and Kashmir’s Rajouri district from achieving a Covid vaccination milestone. The fear of the vaccine was such that the people would flee to nearby forests each time they saw medical teams in the village.

On Wednesday, however, Sunderbani became the first of the 19 blocks in the border district to record 100 per cent vaccination in the 45-plus age group after a medical team, accompanied by police personnel, trekked to the village on a now-or-never mission – and returned with success.

It took six trips, a lot of persuasion – and appeals by one from their own community – to convince the people of Chawrian Mohrah to take the jabs. Those who refused to listen and tried to flee to the forests once again, sources said, were caught by police personnel and made to take the vaccine, an allegation district authorities said they were looking into.

Block Medical Officer (BMO) Dr Manzoor Khan, who accompanied the medical team, undertook the trip that included a three-km walk within two days of rejoining office after recovering from Covid. He had been specially asked by Sunderbani Additional Deputy Commissioner Vinod Behnal to accompany the team as all earlier attempts to convince villagers had failed, said sources.

It only helped that Dr Khan was from the same community as the villagers.

Dr Khan told The Indian Express that Sunderbani block has reported 1,226 Covid cases and 22 deaths in second wave since March this year.Rajouri district, with 212 deaths since the beginning of the pandemic last year, has the second-highest Covid toll after Jammu district’s 1,118 deaths.

The vaccination mission on Wednesday, however, began on a hostile note soon after the health team accompanied by the police reached the village. As soon as they were spotted, some people started pelting them with stones. The BMO then stepped in and spoke to the people in their own Gojri language.

Dr Khan told them about the benefits of the vaccine and gave his own example. He told the villagers that vaccination saved him from getting hospitalised after he got infected.

However, convincing everybody was not easy, the BMO said, adding that villagers at various places had heated arguments with them. The team had to explain why vaccination was necessary to ensure people returned to normal life, he said.

Sources said most were convinced and those who tried to flee were caught and vaccinated. On the alleged use of force, Dr Khan said: “I personally do not approve of it. It is the decision of the administration. Our job is only to vaccinate people and we have nothing to do with the use of force.”

“However, what is the option when one refuses to listen and the administration has to ensure protection of all the people from the pandemic, especially ahead of the third wave,” he added.

Additional Deputy Commissioner Behnal said he did not have knowledge of the use of force during the vaccination drive. “But I will look into the matter,” he said.