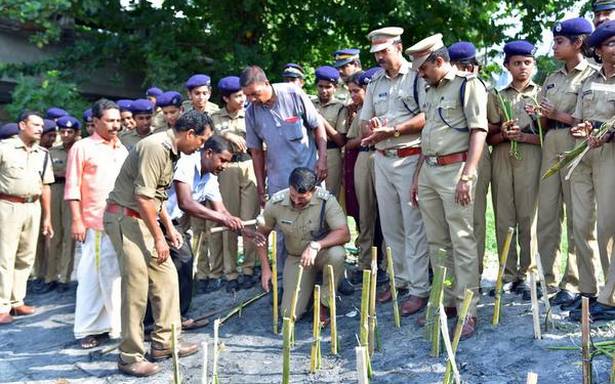 Every Friday a couple of policemen from the Neendakara Coastal police station take a small trip after their routine parade. During the stroll they ensure that the seedlings they planted in nearby areas are growing well and the drill is just one of their many green initiatives.

Since 2016 the station has heavily invested on restoring and preserving the coastal ecosystem and now their efforts have been acknowledged in the form of a biodiversity award.

Also the recipient of the Vanamitra award for Kollam district, instituted by the Kerala Forest and Wildlife Department, it is for the first time in the history of the Kerala Police that a unit is bagging both the honours.

One of the first initiatives of the station was Suchitwa Theeram, Surakshita Theeram, a project to tackle the plastic waste menace. Along with endeavours to make the coast plastic-free, the team also spread awareness on how indiscriminate use will hamper marine ecology and pose a threat to the livelihood of fishers. The mass campaign was held in coordination with voluntary organisations, clubs, libraries and local support groups.

In 2017 they launched a massive mangrove afforestation project in a bid to preserve the biodiverse aquatic habitats.

The project aims to develop a green cover across the coastal belt that stretches from Azheekkal to Paravur and the sides of Ashtamudi Lake, Vattakayal and TS Canal.

Over 5,000 mangrove saplings were planted as part of the project and in 2019 the police started cultivating Calophyllum inophyllum (Punna). In order to make a switch from casuarina to punna, they started collecting the seeds and set up a nursery in the station. Since Punna is said to protect the coastline, more than 500 saplings were planted. While the station has a herbal garden at one spot, plantains are cultivated at another side.

During the pandemic the policemen started feeding strays and herons that were left to starve due to the lockdown.

“We continued all our activities during the pandemic without affecting our duty hours. They were carried out in accordance with the COVID-19 protocol and all the staff attached to the station were involved. Apart from us, coastal wardens and employees of police boats also actively participated in the programmes,” says Assistant Sub Inspector D.Sreekumar, convener.

The projects are being implemented under the guidance of District Police Chief T.Narayanan while Kerala Police Officers Association Kollam city secretary M.C.Prashantan is the coordinator and Assistant Sub Inspector S. Ashokan is the joint convener.