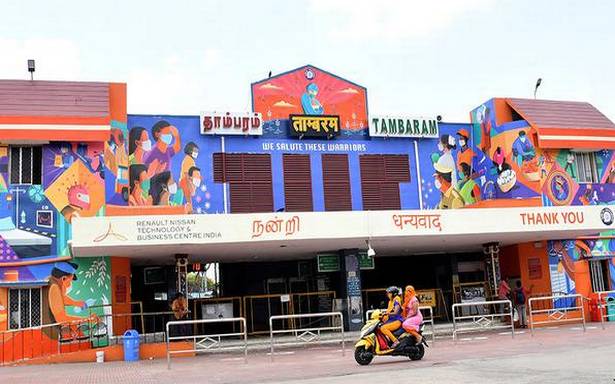 Passengers of long-distance trains have sought more amenities at the Tambaram Railway Station, particularly for easier access and hassle-free boarding.

The Southern Railway had announced the development of a third railway terminal at Tambaram station a few years ago to provide better connectivity to residents of south Chennai.

The news about Tambaram, which had become a multi-modal transport hub, being made a third terminal and the operation of a few direct trains, was welcomed by residents. This meant that the passengers need not go to Egmore or Chengalpattu to board long-distance trains.

The Southern Railway started developing a number of passenger amenities to make the station on par with other railway terminals by installing escalators, building parking yards on both sides and passenger reservation counters.

However, passengers, particularly those travelling by long-distance trains, want more amenities on platforms.

Pandiaraja, a railway activist, said thousands of people board south-bound trains at the Tambaram railway station. While the railway authorities have created better access in the form of escalators and lifts for suburban commuters, long-distance passengers, particularly senior citizens and pregnant women, face severe difficulties in boarding trains on platforms 5 to 8.

Also, there is no digital board displaying the coach numbers on these platforms leaving the passengers stranded. The commuters want the railway authorities to install digital display boards. B. Guganesan, Chief Public Relations Officer, Southern Railway, said a proposal to redevelop the Tambaram railway terminal with all passenger amenities is being studied and will be executed soon.