Here's all that happened during the second day of the Monsoon session of Parliament. Protests over the Pegasus snooping row dominated the Lok Sabha proceedings on the second day of the Monsoon session of Parliament, leading to continued disruptions and repeated adjournments of the House on Tuesday.

As soon as the House met for the day at 11 am, Opposition members, including from the Congress and the TMC, raised slogans and showed placards to attack the government on the snooping issue. The proceedings lasted for barely five minutes as the House was adjourned.

One of the placards, written in Hindi, read that while people are suffering from unemployment, the government is busy with “jasoosi” (spying). The same scene was witnessed when the House reassembled at 2 pm and was later adjourned till 11 AM on July 22. Leaders of various political parties also met before the start of proceedings in both houses of Parliament to decide their strategy on the issue. Several MPs belonging to the Trinamool Congress also staged a protest over the issue in front of Parliament House. Many of them, along with Congress members, had given adjournment notices in both houses demanding a discussion on the issue.

Congress spokesperson Shaktisinh Gohil said the government should clearly tell whether it has purchased the Pegasus spyware or not and hold a joint parliamentary probe. “We had given adjournment notices in both Rajya Sabha and Lok Sabha to hold a discussion on the violation of national security and the fundamental rights under the Constitution over the phone tapping issue,” Gohil told reporters. On Monday, the Narendra Modi-led categorically rejected in the Lok Sabha allegations of snooping on politicians, journalists and others using Pegasus software, asserting that illegal surveillance was not possible with checks and balances in the country’s laws, and alleged that attempts were being made to malign Indian democracy.

Members of opposition parties, who had given as many as 15 notices under rule 267 requiring setting aside of the business of the day to take up the issue they want to raise, raised slogans and rushed into the Well of the House, prompting chairman M Venkaiah Naidu to adjourn the proceedings till 12 noon. 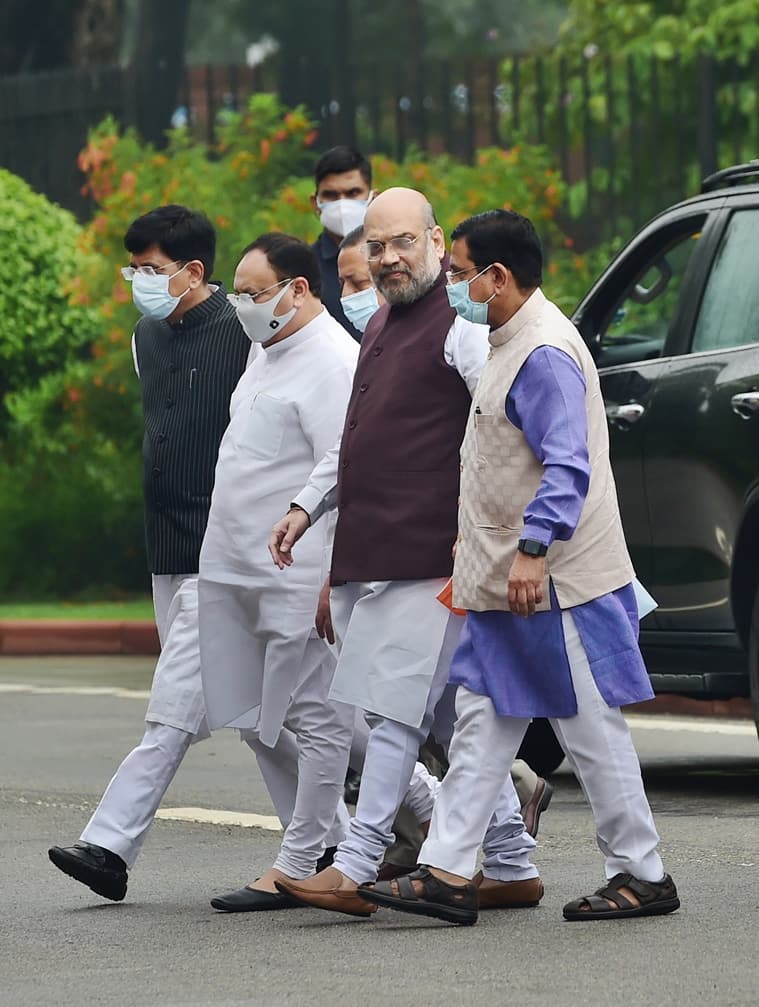 According to PTI, normalcy returned to the Upper House only after Chairman M Venkaiah Naidu met the floor leaders of various parties. Citing sources, the news agency said that Naidu called Leader of the House Piyush Goyal, opposition leaders Anand Sharma, Jairam Ramesh, Derek O’Brien, Tiruchi Siva, and some others, and expressed concern over the repeated disruptions in the House.

The House later resumed and a brief discussion on the Covid-19 crisis took place.

On the allegation of suppressing Covid deaths, Health Minister Mansukh Mandaviya Tuesday said that the Centre never asked any state to record fewer deaths or cases.

“Centre compiles and publishes the data sent in by state governments. Our work is to publish that data and nothing else. We haven’t told anyone to show fewer numbers (of deaths) or less positive cases. There’s no reason for that,” Mandaviya said during a discussion in Rajya Sabha. 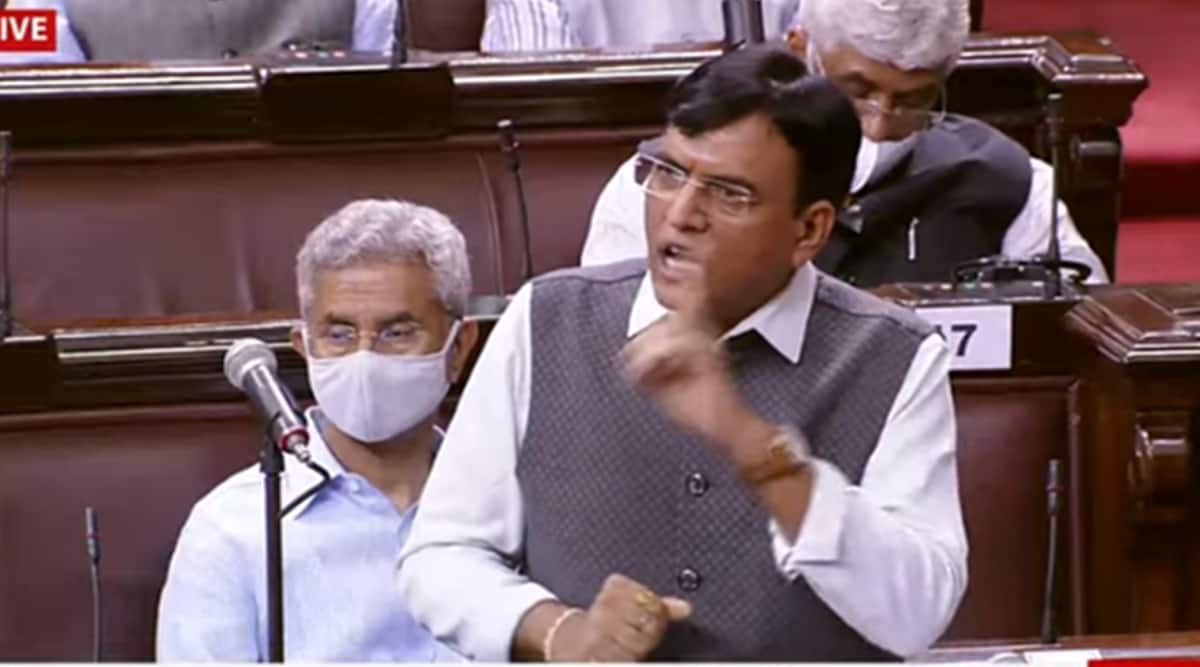 He also said that the resolution of people along with PM Modi’s guidance can save us from a third wave. The health minister also apprised the House on vaccine production in the country saying that several Indian companies are increasing their production of vaccines and that the country may become the first in the world to develop a DNA-based vaccine.

“Cadila has completed third phase trial of its DNA vaccine and has applied for emergency use authorisation before DCGI (Drugs Controller General of India). Our expert team is looking into it. When this will come in the market, India will be the only country where scientists have developed a DNA vaccine,” Mandaviya told Rajya Sabha.

The minister said that Biological E is conducting the third phase of trial of its vaccine and it is expected to come in the market by September-October with 7.5 crore doses. “Zydus Cadila and Bharat Biotech have started trials on children. I expect their trials to be successful. We need to trust our scientists. I trust my scientists and indigenous companies,” Mandaviya said.

Mandaviya also said that the country has started getting 11-12 crore doses of Serum Institute’s Covishield vaccine per month and Bharat Biotech will supply 3.5 crore doses of its Covid vaccine in August.

Taking a strong exception to the Opposition’s attack in Parliament over the government’s Covid-19 response, Prime Minister Narendra Modi Tuesday is learned to have asked his party colleagues to counter their charges citing the availability of the vaccine. The PM said there has been a deliberate attempt to mislead people that there’s a shortage of Covid-19 vaccines in the country. He said the Congress is in a “coma” and it has not been able to digest the BjP coming to power, sources said.

Addressing the BJP MPs at its parliamentary party meeting, the PM reportedly said the party leaders should be prepared to face the anticipated third wave of the coronavirus pandemic.

A party leader said the PM asked the MPs to ensure that the vaccination drive in their respective constituencies is carried out without any glitches.

No deaths due to lack of oxygen reported during second Covid wave: Govt

No deaths due to lack of oxygen were specifically reported by states and UTs during the second Covid-19 wave, the government informed the Rajya Sabha on Tuesday.

According to PTI, while responding to a question on whether a large number of Covid-19 patients died on roads and hospitals due to acute shortage of oxygen in the second wave, Minister of State for Health Bharati Praveen Pawar noted that health is a state subject and states and UTs regularly report the number of cases and deaths to the Centre.

“Detailed guidelines for reporting of deaths have been issued by the Union Health Ministry to all states and UTs.”

“Accordingly, all states and UTs report cases and deaths to the Union Health Ministry on a regular basis. However, no deaths due to lack of oxygen have been specifically reported by states and UTs,” Pawar said in a written reply.