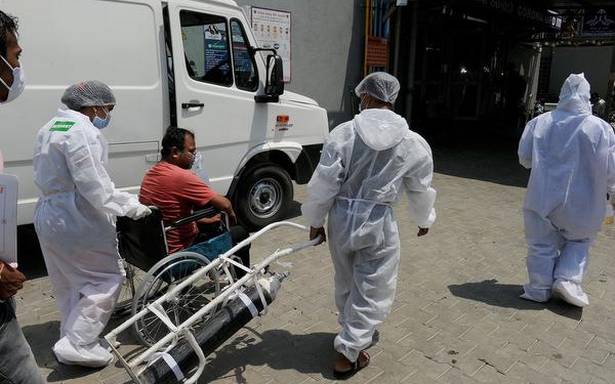 “No deaths due to lack of oxygen have been specifically reported by States and Union Territories,” the Health Ministry said in Rajya Sabha on Tuesday in response to a question on the acute shortage of oxygen during the second wave of the COVID pandemic.

Minister of State, Health and Family Welfare, Bharati Pravin Pawar in her response to the question noted that Central government, during the second COVID wave, had supported the States and undertaken a series of actions including provisioning medical oxygen, and other consumables to ensure clinical care of COVID-19 patients in view of steep rise of COVID-19 trajectory in the country during April- May 2021.

The Minister also noted that the supply of medical oxygen to hospitals is determined by contractual arrangements between the concerned hospital and the medical oxygen supplier.

“However, due to the unprecedented surge in demand of medical oxygen during the second wave — the demand in the country peaked to nearly 9,000 MT as compared to 3,095 MT during the first wave — the Central government had to step in to facilitate equitable distribution to the States,” she said.

“States were provided with oxygen equipment such as oxygen cylinders, concentrators and Pressure Swing Adsorption (PSA) oxygen generation plants. A total of 4,02,517 oxygen cylinders have been procured/ are being procured and distributed to the States. Also, 1,222 PSA Oxygen generation plants have been sanctioned. Out of these, as on July 15, 2021, 237 plants have been commissioned. Apart from this, 295 PSA plants are being installed by different ministries. States have also been asked to prepare State-level oxygen generation plants and with a view to increase the storage capacity of Liquid Medical Oxygen in the States, under the emergency COVID Package-Part-II, 1,050 Liquid Medical Oxygen Tanks along with MGPS at a cost of ₹80 lakh each have been approved,” the Upper House was informed.