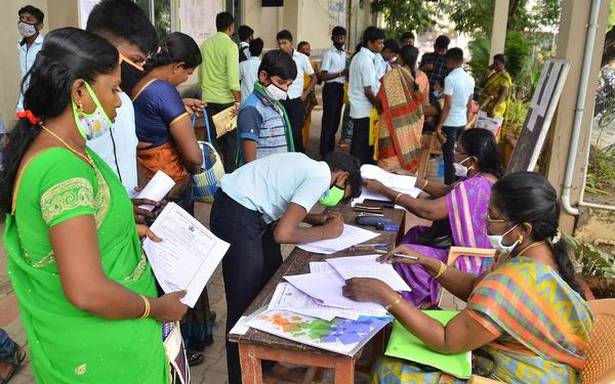 A majority of parents of SSLC and Plus Two students, who have to appear for the public examination in March/April, are of the opinion that the Department of School Education should reopen schools that remain closed since March last due to COVID-19.

After they were asked to submit their views in writing for the second time on the issue, they came to the schools accompanied by their wards on Thursday.

The students and their parents were allowed to enter Kallanai Corporation Higher Secondary School in Tirunelveli Town to submit the completed forms. But schools in Palayamkottai allowed only the parents to enter the campus in a bid to maintain physical distancing among visitors.

On entering the premises, parents were asked to the meet the class teachers of their wards to submit the forms. On emerging out, many said they were in favour of reopening of schools with protective measures such as physical distancing in classrooms and laboratories and sanitisers put in place.

“Since vaccine is to be administered to frontline health workers to shield them from the viral infection, it can also be administered to students on a priority basis so that they can attend classes or revision tests without fear of getting infected,” said N. Balamurugan, father of a student from Alangulam in Tenkasi district.

Managements of schools that have hostels are not ready to reopen the facility even though the Department of School Education has decided to reopen the institutions from January 18.

“After almost losing a whole academic year, we may restart activities mid-January. If we reopen the hostel, one infected student can spoil the entire academic plan we have in mind as we will have to close the school and the hostel,” said the headmistress of a girls’ higher secondary school in Palayamkottai.

“So we do not want to take the risk of reopening hostels even though we have understood that it would be difficult for poor rural children coming to school from homes in remote areas,” she added.