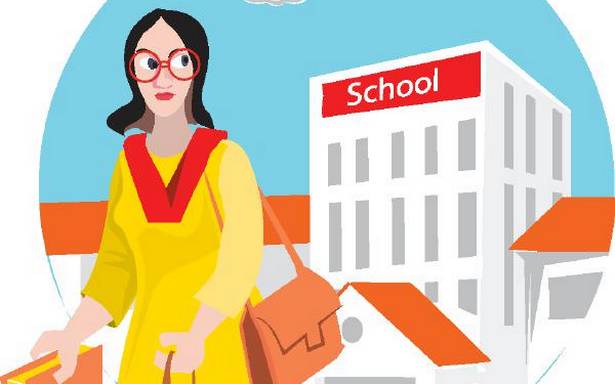 A little over a week into the new academic year, private schools, especially those following the State syllabus, are grappling with yet another problem — the lack of experienced teachers to conduct online classes. With pay cuts and longer working hours because of online classes, many senior teachers have resigned to take up more lucrative jobs in related fields.

Senior teachers whom The Hindu spoke to said they were forced to switch career paths after spending decades in this profession as they were finding it difficult to sustain their families because of the steep pay cuts introduced in the previous academic year. When they started looking for other opportunities, they were pleasantly surprised to find some demand for their skills.

Teachers have found better paying job opportunities on content writing platforms and corporate houses looking for good communicators. Even those with fewer years of experience have found more lucrative jobs in call centres and in the garment industry. Teachers in rural areas have decided to work in their fields.

While top Central board schools did not slash salaries of staff for the 2021-22 academic year, they decided not to award increments this year. Teachers from low-budget schools affiliated to the State syllabus, however, were the most badly affected. Many of these schools, which have fixed salaries based on the teacher’s experience and the subjects they teach, decided to cut salaries by 50%. For instance, a senior high school language teacher who was getting paid a monthly salary of ₹35,000, now earns ₹17,500.

Narendra Kumar, a science teacher at Vidyanjali Primary and High School in Bengaluru, said that he quit teaching in November last year and relocated to his hometown in Chickballapur district where he has taken up farming. “I have a lot of interest in teaching but it is difficult to sustain a family on my salary. Hopefully things will improve after the pandemic and I will be happy to be back in the classroom again.”

Kannada and Hindi teacher Pratap H.G., who has eight years of experience, has been trying out starting different types of businesses, hoping that one of his ideas will click. “The school management said our salaries are dependent on fees paid by parents. We were informed that if a significant number of parents pay the fees in the coming academic year, we would get paid half the salary. So I decided to quit as my parents are senior citizens dependent on me.”

D. Shashi Kumar, general secretary of the Associated Managements of Primary and Secondary Schools in Karnataka, said it was unfortunate that their highly experienced and educated teachers were quitting the profession. “As a result of this, we are not able to sustain the quality of teaching,” he said.

To address the shortage, some schools have decided to rope in teachers on an hourly basis. “They get paid by the hour and can take up work outside the school when they have no online classes,” said a school principal. She admitted that it was not an ideal solution, but a stopgap measure.