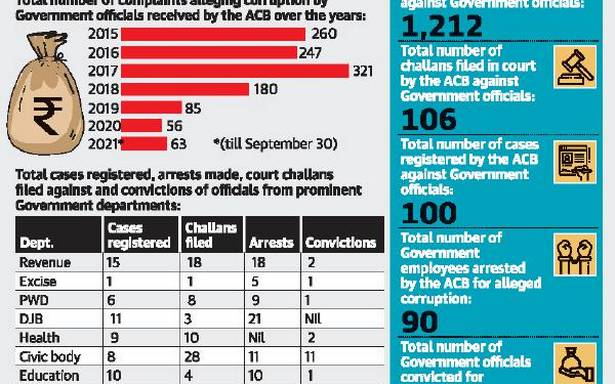 After witnessing a brief slowdown following the advent of the pandemic last year, alleged corruption in the city’s Government departments appears to be back with a vengeance.

The number of complaints alleging graft against officials posted in various Government departments received by the Anti-Corruption Branch (ACB) till the end of September surpassed the total number of complaints filed with the ACB throughout 2020 by over 12%, it stated in response to a Right to Information query from The Hindu.

The ACB had registered 12 cases of alleged graft and arrested 11 Government officials in 2020. Till the end of September 2021, a total of 11 cases have been registered and 10 Government employees have been arrested.

From 2015 to September 30 this year, prominent departments such as revenue saw 15, Delhi Jal Board (DJB) 11, education 10, health 9 and the municipal corporations of Delhi 8 cases registered against their employees by the anti-graft body.

The most number of arrests, 21, were of DJB officials followed by 18 of Revenue Department, 11 civic body, and 10 Education Department officials. However, as many as 11 civic body employees were convicted during the period compared to only two officials, each, from the Revenue and Health Departments and one each from departments, including Excise, PWD and Education. Not even a single DJB official was convicted during the period.

The ACB, created in 1975, was envisioned as a police station with jurisdiction ‘all over the National Capital Territory of Delhi’ and mandated with the investigation of offences under the Prevention of Corruption Act (1988).

In addition to the power to conduct inquiries against public servants of the Delhi Government and departments under the L-G, the ACB, till mid-2015, had the power to probe graft complaints against officials posted in departments such as the Delhi Police and the DDA, if the instances of alleged graft unfolded within the borders of the Capital.

Between 2014 and 2015, back-to-back directives were issued by the Ministry of Home Affairs (MHA) effectively curtailing its ambit and power to investigate graft complaints against officials employed by the Central Government.

Sources said the seemingly ‘low’ complaint-to-case conversion ratio was due to this ‘change in the remit’ of the anti-graft body.