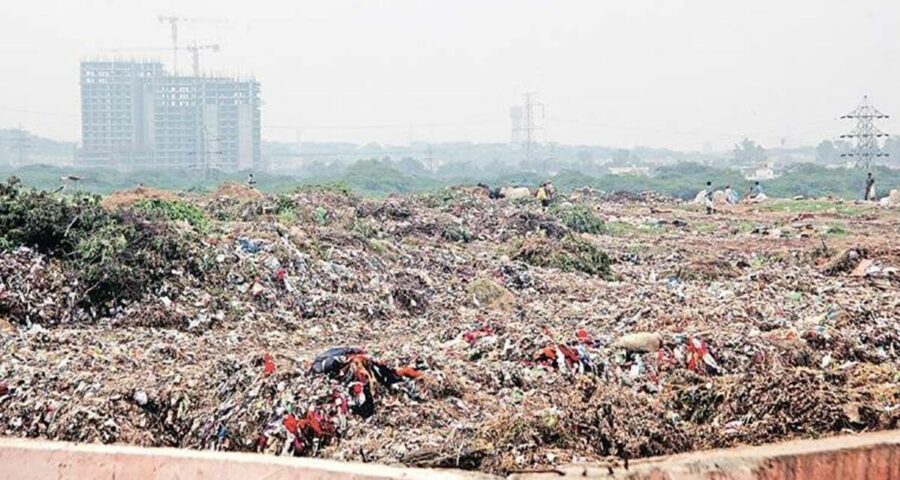 The bio-remediation of the dumping ground at Sector 23 had been approved last year in February, with the National Green Tribunal later ordering that the project be wrapped up by April this year. Dumping waste at the Sector 23 dumping ground of Panchkula finally partially stopped on Tuesday, more than two months after an NGT deadline which had ordered the municipal corporation to complete the bio-remediation of the site by April this year.

The residents, however, said that the shifting of the dumping ground from sector 23 to the new Jhuriwala site will not bring them any relief or end their woes.

The bio-remediation of the dumping ground at Sector 23 had been approved last year in February, with the National Green Tribunal later ordering that the project be wrapped up by April this year. However, work on the project finally started on June 4, last week, after around 16 months of delay.

At least four lakh tonnes of legacy waste was scheduled to be shifted from Sector 23 to the Jhuriwala site, which was then to be processed with the help of a solid waste management plant.

On Tuesday, The Indian Express noticed that all garbage trucks of the district were being routed to the Jhuriwala site. However, small tempos collecting garbage from the city continued making rounds of the sector 23 site as the site at Jhuriwala village remained inaccessible to them, several RWAs of the region said.

Garbage dumping at Jhuriwala begins without a waste management plant

The bio-remediation of the dumping ground as well as setting up of an integrated waste management plant were intertwined projects and were supposed to come up together. Officials, however, said that despite their best effort, the plan to set up an integrated solid waste management plant at Jhuriwala for the disposing of garbage, never materialised despite two tenders for the same being floated.

As per records of the municipality, the project of setting up a solid waste management plant at Jhuriwala, was supposed to cost an estimated Rs 65 crore, and the tenders for the same was opened in the beginning of 2018 and received two bids. The tender was initially awarded to a Japan-based firm, but was cancelled later. The bids were then re-invited in late 2019, following which two firms again applied for it. While one bidder was found to be non-responsive, the other firm was then awarded the project. Initially, the bid was quoted at 2727 per tonne of waste, negotiations were held and price for the same was brought down to 2219 per tonne. But this bid too was soon cancelled, as the second firm withdrew its application.

Since then, the municipality has refloated the tender for the solid waste management plant twice in the last six months, but had not received any bids. Panchkula Mayor Kulbhushan Goyal said that the civic body will soon refloat the tender again.

In absence of a plant to process the more than four lakh tonnes of legacy waste being lifted, all garbage will simply be relocated from one site to another.

Haryana Chief Minister Manohar Lal Khattar in a press conference on Tuesday said that the bio-mining of the Sector 23 dumping ground will be completed by December 31 this year.

The residents of the area, including the Resident Welfare Associations from Sector 23 to 28 along with the local Congress councillor of ward 17, Akshaydeep Chaudhary, have held at least two meetings within the past three days to discuss the matter.

“Both sites are equally harmful for the residents as the waste will not be processed. The new Jhuriwala site is actually closer to us than the present sector 23 dumping ground. While the Sector 23 dumping ground is 300 metres away, the Jhuriwala site is just 250 meters away. The shift will not bring about any change to our living conditions. It is only a media gimmick and the residents have been opposing it ever since the project’s conception,” said RWA President from Sector 25, MK Kalkra.

“We are preparing a memorandum which will highlight several issues that will be faced by the residents of the sectors and will also highlight how throwing garbage at Jhuriwala site is illegal,” added Congress councillor Akshaydeep. The memorandum will then be submitted to the district Deputy Commissioner on June 10, with the locals threatening to hold a massive protest on June 19 if their demands were not looked into.

“No environmental clearance has been obtained by the Municipal Corporation of Panchkula to dump solid waste at the proposed site in Jhuriwala. Neither has any permission been granted by the Union ministry of environment, forest and climate change for the same,” a representation from the residents to the district administration read.

This proposed site is on the Panchkula-Yamuna Nagar National Highway and is also just 140 mtrs away from the boundary of the declared wildlife sanctuary (Khol Hai Raitan Wildlife Sanctuary popularly known as the Morni Wildlife Sanctuary). The representation further states, “The proposed site is most ill-suited for dumping of solid waste and will endanger not only the environment, but it will also threaten endangered species within the wildlife sanctuary. Our lives will also be at risk as the site is merely 500 mtrs away from the already inhabited Sector 25 Panchkula, which is virtually sandwiched between the existing illegal dumping ground in Sector 23 Panchkula and the proposed site. The proposed site is also opposite Sectors 23-A and 25-A as ear-marked in the layout plan.”

The joint association stated that “Any usage of the proposed site for dumping solid waste without obtaining environment clearance and other approvals will be in violation of the Environment Protection Act, the Solid Waste Management Rules, and the direction issued by the National Green Tribunal, New Delhi.”

Questioned about the environmental clearances, Mayor Kulbhushan Goyal said, “This is a departmental query, they will know better.”

Newly appointed civic body commissioner Sharandeep Kaur refuse to respond to calls and texts seeking a comment on the issue.