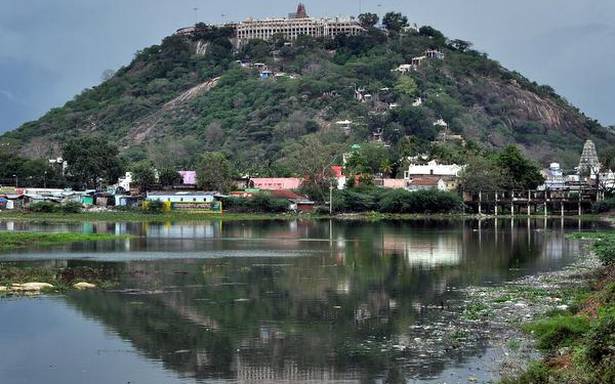 Steps will be taken to perform the kumbabishekam at the famous Sri Dhandayuthapani Swamy Temple, within about a year, said HR and CE minister P. K. Sekar Babu on Tuesday.

The Minister, who was here to inspect the ongoing development work in and around the temple town, accompanied by HR and CE commissioner J. Kumaraguruparan, Ministers I. Periasami and R. Sakkarapani, Dindigul Lok Sabha MP P. Velusami, MLAs I. P. Senthil Kumar and S. Gandhirajan and others, told reporters that the kumbabishekam was conducted last in 2006.

He also went to see the drinking water project being undertaken here at a cost of ₹22.72 crore with sourcing from the Palar reservoir. Officials said that the work would be completed by August.

Mr. Sekar Babu said that the second rope car project, which was sanctioned in 2017, had not been implemented by the then AIADMK government for various reasons. “We will take it up and dedicate it to the public soon,” he added.

From now on, the hymns (potrikai and thirupathingal) sung daily during the aru-kala puja performed at the temple by the Oduvars and Archakars would be available on YouTube and the HR and CE website. Devotees around the globe can access them, the Minister said and launched the facility on the occasion.

He also said that 52 acres of land was being acquired for the temple. He wished the Murugan temple had the infrastructural facilities along the lines of the Tirumala Tirupati Devasthanam (TTD).

Along with Minister I. Periasami, he interacted with faculty members here and agreed to establish educational institutions at Oddanchatram and Chatirapatti.