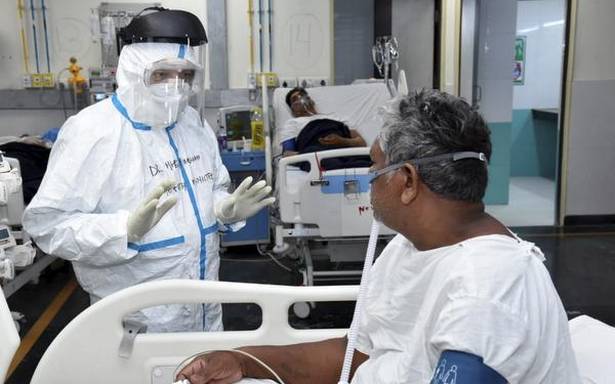 The government has sanctioned 162 Pressure Swing Adsorption plants of which 33 had been installed, says Health Minister.

Amidst heightened demand for medical-grade oxygen, Health Minister Harsh Vardhan said that the production was being doubled.

The government had sanctioned 162 Pressure Swing Adsorption (PSA) plants of which 33 had been installed. Five of them were installed in Madhya Pradesh, four in Maharashtra, three each in Chandigarh, Gujarat and Uttarakhand, two each in Bihar, Karnataka and Tamil Nadu and one each in Andhra Pradesh, Chhattisgarh, Delhi, Haryana, Kerala, Maharashtra, Puducherry, Punjab and Uttar Pradesh.

A 100 more such plants were collectively requested by States and they too were being sanctioned, the Health Ministry said in a series of tweets on Sunday morning.

Mr. Vardhan added that oxygen production was being diverted from industrial to medical use. Additional ventilators were being provided by the Centre to the States. Maharashtra is to get 1,121 ventilators, Uttar Pradesh 1,700, Jharkhand 1,500, Gujarat 1,600, Madhya Pradesh 152 and Chhattisgarh 230.

Vaccines were being replenished in ‘small’ States every seven days and every four days in ‘big’ States, Mr. Vardhan tweeted without clarifying the criteria for big and small.

As on Sunday, the Health Ministry reported administering 12 crore vaccines. Eight States accounted for about 60% of these. With 2.6 lakh doses being given in the last 24 hours, it was the third day in a row this week that the number of daily doses administered fell below 3 lakh.